Voices // 5 days ago
Time for U.S. diplomacy with Iran is over
American policy on Iran may not face a radical change under President Joe Biden after all, if 120 bipartisan members of the House of Representatives have their way.

World News // 2 weeks ago
South Korean same-sex couple sues health insurer for equal rights
A same-sex couple filed a lawsuit against South Korea's national health insurance agency on Thursday, accusing it of violating their rights by not allowing one spouse to claim the other as a dependent.

World News // 2 weeks ago
Western nations warn Myanmar military 'the world is watching'
Western embassies in Myanmar warned the military against violently cracking down on protesters who, took to the streets for a 10th consecutive day on Monday. 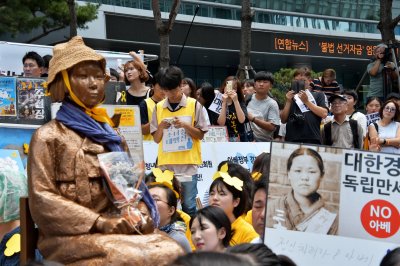 World News // 1 month ago
Russian police raid Navalny's home, offices
Police in Russia on Wednesday raided the home and offices of jailed opposition leader Alexei Navalny as well as those of his allies, some of whom have been detained, associates of the staunch Putin critic said.

Amnesty International (commonly known as Amnesty and AI) is an international non-governmental organisation which defines its mission as "to conduct research and generate action to prevent and end grave abuses of human rights and to demand justice for those whose rights have been violated." Founded in London, England in 1961, AI draws its attention to human rights abuses and campaigns for compliance with international standards. It works to mobilise public opinion which exerts pressure on individuals who perpetrate abuses. The organisation was awarded the 1977 Nobel Peace Prize for its "campaign against torture" and the United Nations Prize in the Field of Human Rights in 1978.

In the field of international human rights organisations (of which there were 300 in 1996), Amnesty has the longest history and broadest name recognition, and "is believed by many to set standards for the movement as a whole."

Amnesty International was founded in London in July 1961 by English labour lawyer Peter Benenson. According to his own account, he was travelling in the London Underground on 19 November 1960, when he read of two Portuguese students who had been sentenced to seven years of imprisonment for having drunk a toast to liberty. In his famous newspaper article The Forgotten Prisoners, Benenson later described his reaction as follows: "Open your newspaper any day of the week and you will find a story from somewhere of someone being imprisoned, tortured or executed because his opinions or religion are unacceptable to his government The newspaper reader feels a sickening sense of impotence. Yet if these feelings of disgust could be united into common action, something effective could be done."

FULL ARTICLE AT WIKIPEDIA.ORG
This article is licensed under the GNU Free Documentation License.
It uses material from the Wikipedia article "Amnesty International."
Back to Article
/