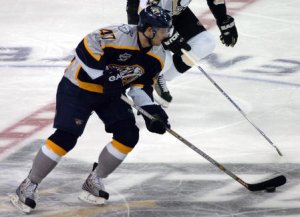 Sports News // 3 years ago
Cowboys' Ezekiel Elliott comforts boy hit by puck during Stanley Cup Playoffs
Dallas Cowboys running back Ezekiel Elliott helped a young fan smile after he was hit by a puck during the Dallas Stars' playoffs loss to the St. Louis Blues.

NHL // 3 years ago
John Klingberg sends Stars into second round with OT winner against Predators
Dallas Stars defenseman John Klingberg fired a shot from the face-off circle to beat goaltender Pekka Rinne and the Nashville Predators in Game 6.

NHL // 3 years ago
Sharks look to stay hot against Stars
The San Jose Sharks might be getting the pieces together for a sustained run.

NHL // 3 years ago
Predators, Stars get first look at one another
DALLAS -- Last season, the Nashville Predators took three of the four meetings against the Dallas Stars, outscoring them 14-7.

NHL // 3 years ago
Sharks, Stars set for first meeting of season
DALLAS -- At one time, the San Jose Sharks and Dallas Stars saw plenty of one another as Pacific Division rivals.

NHL // 3 years ago
Stars starting to click; Red Wings still struggling
DETROIT -- The Dallas Stars are beginning to play the way they want to and the Detroit Red Wings aren't.

He started his North American career, in 2004–2005, being drafted at the 2004 CHL Import player draft by the Québec Remparts in the QMJHL from the CHL. That year, he finished third in scoring for his team, with 75 points in 65 games behind Josh Hennessy and Karl Gagné.

The following year, he became one of the most exciting and dominant players to play in the QMJHL. In the first half of the season, he and rookie Angelo Esposito formed one of the most explosive duos in the league. He became equally renowned for skating in front of the opposing team's bench and twirling his stick around and banging the handle on the ice, as if to put a sword into a sheath, after scoring a goal, something that angered opposing players but captivated and inspired his coach, Patrick Roy.

FULL ARTICLE AT WIKIPEDIA.ORG
This article is licensed under the GNU Free Documentation License.
It uses material from the Wikipedia article "Alexander Radulov."