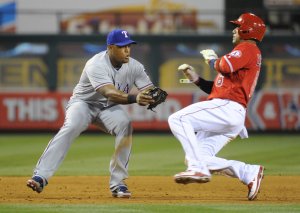 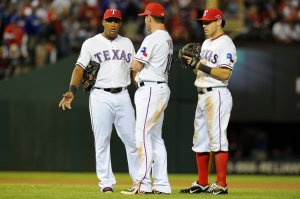 MLB // 2 years ago
A's carry deep thoughts into finale with Rangers
OAKLAND, Calif. -- The Oakland Athletics will seek to surpass 200 home runs for the sixth time in franchise history Sunday afternoon when they complete what has been a high-scoring, three-game series against the Texas Rangers.

MLB // 2 years ago
Athletics open series vs. last-place Rangers
OAKLAND, Calif. -- Having battled heavyweights for 10 consecutive games, the Oakland Athletics get a chance to enjoy the rivals knocking out each other when they open a three-game series against the last-place Texas Rangers on Friday night.

MLB // 2 years ago
Rangers, Angels to miss star power in series opener
Both the Texas Rangers and Los Angeles Angels will be without one of their star players when the two American League West rivals open a four-game series on Thursday at Globe Life Park in Arlington, Texas.

MLB // 2 years ago
Beltre, Rangers face Diamondbacks amid trade rumors
It looked like more and more likely that third baseman Adrian Beltre and relief pitcher Keone Kela would still be with the Texas Rangers after the trade deadline Tuesday, when they leave the Valley of the Sun after the second of a two-game series with Arizona.

Looking back at when I was asked that question in spring training, I'd be lying if I said that I knew I would be having the season I had

He was signed out of the Dominican Republic by the Los Angeles Dodgers in 1994. Beltré attended Liceo Maximo Gomez High School, where he developed into one of the school’s top players. In 1994, while working out at Campo Las Palmas, the Los Angeles Dodgers facility, he was spotted by scouts Ralph Avila and Pablo Peguero. Though only 15 and weighing just 130 pounds, he had a lightning-quick swing and electric throwing arm. On the insistence of Avila and Peguero, the Dodgers signed Beltré in July. He received a $23,000 bonus. When it was revealed that Beltré had signed his initial contract at the age of 15, commissioner Bud Selig suspended the Dodgers' scouting operations in the Dominican Republic for a year, because signing a player at that age was prevented under MLB rules.

After being called up to the majors from the then Dodgers Double-A affiliate San Antonio Missions, Beltré made his major league debut on June 24, starting at third base in the first game of an interleague series against the Anaheim Angels. During his first at-bat, Beltré smashed a two-out RBI double off Angels starter Chuck Finley into left field to score Paul Konerko from second base to tie the game. He would hit his first home run six days later against Texas Rangers starter Rick Helling. At the end of the 1998 season, Beltré would finish with 13 errors at third base while batting .215 with seven home runs.

FULL ARTICLE AT WIKIPEDIA.ORG
This article is licensed under the GNU Free Documentation License.
It uses material from the Wikipedia article "Adrian Beltre."
Back to Article
/