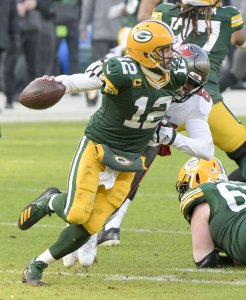 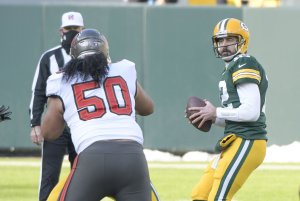 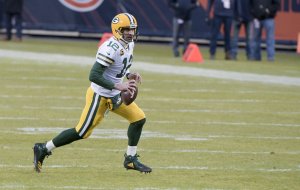 NFL // 3 weeks ago
Aaron Rodgers: Rift with Packers not about Jordan Love
Quarterback Aaron Rodgers' rift with the Green Bay Packers is about the franchise's philosophy, character and culture, and not backup quarterback Jordan Love's place on the team's roster, the reigning NFL MVP said.

NFL // 1 month ago
Packers say they won't 'trade Aaron Rodgers' amid QB's frustration with team
Green Bay Packers general manager Brian Gutekunst addressed the Aaron Rodgers saga in a simple manner in a Zoom meeting with reporters during the NFL Draft. He said the team won't part with the quarterback.

Aaron Charles Rodgers (born December 2, 1983) is an American football quarterback for the Green Bay Packers of the National Football League (NFL). Rodgers was selected in the first round (24th overall) of the 2005 NFL Draft by the Packers. Rodgers played college football while attending the University of California, Berkeley, where he set several California Golden Bears records, including lowest interception rate at 1.43%.

Professionally, Rodgers is the NFL's all-time career leader in passer rating during both the regular season (99.1), and in the post-season (112.6) – among passers with at least 1,500 and 150 pass attempts respectively. He also owns the league's lowest career pass interception percentage for quarterbacks during the regular season (1.99%).

Rodgers was born in Chico in Butte County, California. He attended Vose Elementary School and Whitford Middle School in Beaverton, Oregon, playing baseball in the Raleigh Hills Little League at the positions of shortstop, center field and pitcher. He returned to Chico in 1997 and attended Pleasant Valley High School, starting for two years at quarterback and garnering 4,421 passing yards. He set single-game records of 6 touchdowns and 440 all-purpose yards. Rodgers also set a single-season record with 2,466 total yards in 2001 and graduated in the spring of 2002.

FULL ARTICLE AT WIKIPEDIA.ORG
This article is licensed under the GNU Free Documentation License.
It uses material from the Wikipedia article "Aaron Rodgers."
Back to Article
/