Powerful Typhoon Chanthu to brush Philippines on journey toward Taiwan

As of Thursday evening, local time, Chanthu's outer rain bands had already begun to impact northern portions of the Philippines. Chanthu was tracking to the west-northwest at a speed of 12 mph, according to the Japanese Meteorological Agency. Chanthu's 10-minute average sustained winds were 120 mph, meaning it was the equivalent of a Category 4 hurricane on the Saffir-Simpson Hurricane Wind Scale.

The Joint Typhoon Warning Center designated Chanthu as a super typhoon on Wednesday based on its one-minute average sustained wind speed. The first storm of the season to achieve super typhoon status was Super Typhoon Surigae, which roared to life in mid-April.

Due to favorable conditions for development in the Philippine Sea, Chanthu was able to undergo rapid intensification Tuesday into Wednesday. Rapid intensification is defined as a tropical system gaining 35 mph of sustained wind speed in 24 hours or less.

Chanthu had developed a clear eye on satellite imagery on Wednesday, further indicating just how powerful the storm had become.

Late Thursday evening, local time, Chanthu had lost just enough wind intensity to slip below the threshold for a super typhoon, but it remained the equivalent of a Category 4 hurricane and a powerful typhoon.

Despite the opportunity for some strengthening, Chanthu is forecast to retain its current designation as the equivalent of a Category 4 hurricane as it comes close to the northernmost portion of the Philippines into Saturday. However, AccuWeather forecasters caution there is a non-zero chance, given the favorable conditions for development, that Chanthu could briefly reach the equivalent of a Category 5 hurricane early in the weekend. 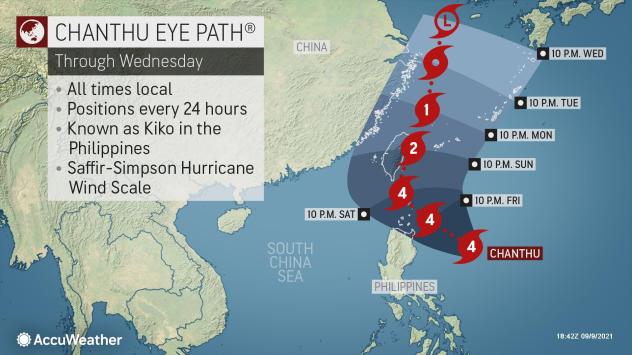 In the Philippines, Chanthu is known as Kiko, according to the Philippine Atmospheric, Geophysical and Astronomical Services Administration.

The heaviest rainfall from Chanthu is forecast to stay offshore of the Philippines. Rainfall of 1 inch to 2 inches is possible over much of Luzon, but higher amounts are likely for northeastern portions of the island chain. Up to 4 inches to 8 inches can fall across eastern portions of Northern Luzon.

RELATED Deaths from Hurricane Ida rise to 26 in Louisiana; many heat-caused

Some tropical storm-force wind gusts (gusts greater than 40 mph) are possible over portions of Northern Luzon. Wind gusts over this magnitude may be enough to bring down some trees or power lines, especially in areas already oversaturated with rain.

Portions of Luzon were still dealing with impacts from Tropical Storm Conson into Wednesday night. Now the area will have to brace for additional tropical impacts just 24 hours to 36 hours after the exit of Conson.

Chanthu is forecast to make landfall over central Taiwan late this weekend, likely as the equivalent of a Category 3 or 4 hurricane. Once the storm encounters the mountainous terrain of Taiwan, AccuWeather forecasters say it will likely lose wind intensity rather quickly. 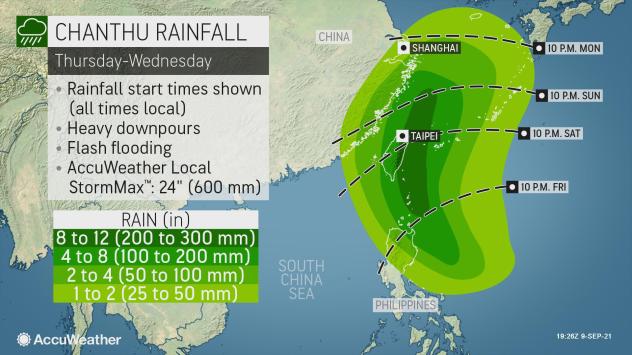 Widespread rainfall amounts of 8 inches to 12 inches are likely over the eastern portion of Taiwan, with an AccuWeather Local StormMax™ of 24 inches. Rainfall amounts in excess of 1 foot will likely be confined to higher-elevation areas due to the effects of upsloping.

Wind gusts will also be more robust for Taiwan than what can occur over the northern portions of the Philippines. Wind gusts of 100 mph to 120 mph with an AccuWeather Local StormMax™ of 130 mph are likely to impact the eastern portion of Taiwan. Widespread wind gusts of 80 mph 100 mph will overspread the rest of the country. 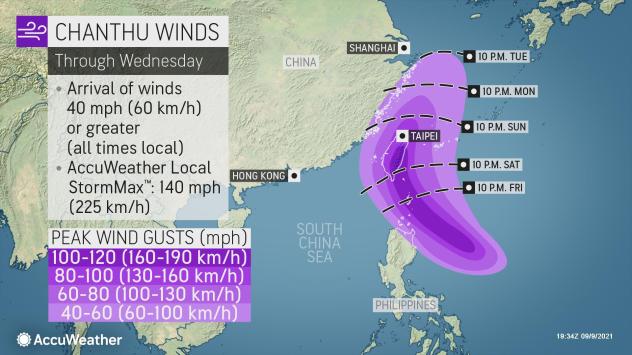 Wind gusts of this strength can be enough to do significant damage to well-built structures as well as take down trees and power lines.

After impacting Taiwan, Chanthu is forecast to emerge over the East China Sea early next week, likely as the equivalent of a Category 1 hurricane.

At this time, there is still a degree of uncertainty in Chanthu's track past Taiwan, forecasters say. Prolonged interaction with Taiwan could cause the storm to lose more wind intensity and take more of a northerly turn and skim the coastline of China early next week. A briefer interaction with Taiwan would allow Chanthu to continue generally westward and potentially make a landfall in China.

Mindy weakens to tropical depression as it moves over southern Georgia

World News // 2 hours ago
U.N. head fears war in Ukraine is widening as world watches
Feb. 7 (UPI) -- As the war in Ukraine nears one-year old, the head of the United Nations said he fears it may be expanding into a wider conflict as the world looks on.