Evacuees from Mallacoota are transported on a landing craft to a ship at sea on Friday during bushfire relief efforts. Photo coutesy of LSIS Shane Cameron/Royal Australian Navy/EPA-EFE

Jan. 3 (UPI) -- An Australian navy ship on Friday started to evacuate some 900 people trapped off the Victoria coastline by wild bushfires. The blazes are expected to continue through the weekend as temperatures continue to hover at record highs.

Many of those rescued were vacationing when bushfires reached Mallacoota, cutting off escape routes via road and forcing those who waited too late to head toward the beaches. Helicopters ferried some passengers who could not get on the ship by a rope ladder.

Victoria officials declared a disaster Thursday, which opened up evacuation locations on the eastern coast. More than 1,000 homes have been destroyed in the fires that have scorched 15 million acres.

"If you can leave, you must leave," Victorian Premier Daniel Andrews said Friday. "We cannot guarantee your safety."

Authorities established a leave zone for Batemans Bay down to the South Coast. Another had been put in place for Nowra down to Ulladulla.

On Thursday, New South Wales declared an emergency and evacuation of the southeastern region, called by one official the largest exodus in the region's history.

Nine people have died this week, bringing the official total to 18 this fire season with numerous others remaining unaccounted for.

Forecasters are predicting a new round of extreme weather this weekend that could spark more bushfires. Temperatures are expected to climb to 104 degrees Fahrenheit in several areas, creating conditions for more fires to erupt with the addition of strong winds.

"It's going to be a blast furnace," Australian Transport Minister Andrew Constance said.

World News // 1 hour ago
Drone attack at Iraq airport aimed at U.S. troops, officials say
April 15 (UPI) -- A drone attack has targeted an airport in northern Iraq, and government officials believe the strike was aimed at U.S. forces who were using part of the facility.

World News // 2 hours ago
Tsai Ing-wen signals cooperation during meeting with Biden's emissaries in Taiwan
April 15 (UPI) -- Taiwanese President Tsai Ing-wen said she is willing to work with "like-minded countries" during a meeting with U.S. delegates. 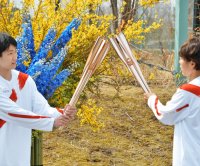 World News // 3 hours ago
Japanese official says canceling Tokyo Olympics still a viable option
April 15 (UPI) -- With less than 100 days to go before the start of the Summer Olympics in Tokyo, a Japanese official said Thursday that the Games could realistically be canceled if surging COVID-19 cases aren't brought under control.

World News // 4 hours ago
Volcanic ash poses various, and possibly unseen, dangers
A volcanic eruption is one of the most powerful forces in nature, a seemingly unstoppable phenomenon that can have far-reaching impacts far beyond the area surrounding the volcano.

World News // 21 hours ago
South Korea ranks last for birthrate in U.N. report
April 14 (UPI) -- South Korea has the world's lowest birthrate, according to the latest report from the United Nations Population Fund.

World News // 22 hours ago
Woman in South Korea toddler murder case begs for forgiveness
April 14 (UPI) -- South Korean prosecutors are seeking the death penalty for a woman charged with gross negligence manslaughter in the death of a 16-month-old girl.