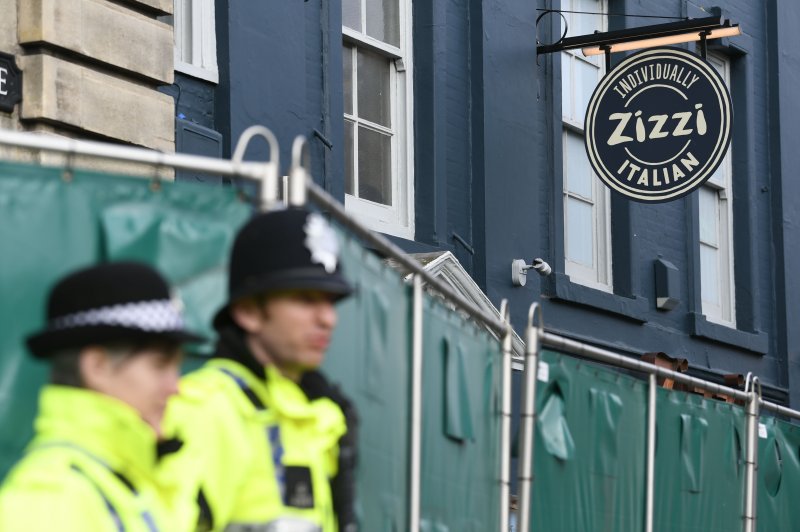 Police stand near the cordoned off Zizzi restaurant after traces of a nerve agent used against former Russian spy Sergei Skripal and his daughter were found. File photo by Neil Hall/EPA-EFE

April 10 (UPI) -- After more than a month, Yulia Skripal, the poisoned daughter of the former Russian spy Sergei Skripal, was dicharged from a British hospital Tuesday.

Skripal was taken to a secure location and hospital officials said her release is a "significant milestone" in her recovery.

Sergei Skripal, 66, is still hospitalized, recovering "more slowly." He is no longer in critical condition.

"Although he's recovering more slowly than Yulia we hope he too will be able to leave hospital in due course," Dr. Christine Blanshard said.

Sergei and Yulia Skripal have been hospitalized since they were attacked by a nerve agent while visiting a British shopping district in Salisbury. The pair were found on a park bench March 4.

Investigators said traces of the poison was found at Zizzi, a restaurant where the pair ate on the day of the attack. Police believe they first came into contact with the nerve agent at their home.

The Skripals are expected to receive new identities and will begin a new life in the United States.

"This use of a military-grade nerve agent, of a type developed by Russia, constitutes the first offensive use of a nerve agent in Europe since the Second World War. It is an assault on the United Kingdom's sovereignty and any such use by a state party is a clear violation of the Chemical Weapons Convention and a breach of international law," France, Germany, Britain and the United States said in a statement last month.

"It threatens the security of us all."

Russia has denied involvement in the poisoning and has asked for proof that it was responsible.

"We congratulate Yulia Skripal on her recovery," the Russian Embassy in Britain tweeted. "Yet we need urgent proof that what is being done to her is done on her own free will."

Although British scientists have been unable to prove Russia was the source of the nerve agent, British Prime Minister Theresa May expelled 23 Russian diplomats in retaliation for the attack. The United States also expelled 60 Russian diplomats.

Moscow responded by expelling an equal number of British and American diplomats from Russia.