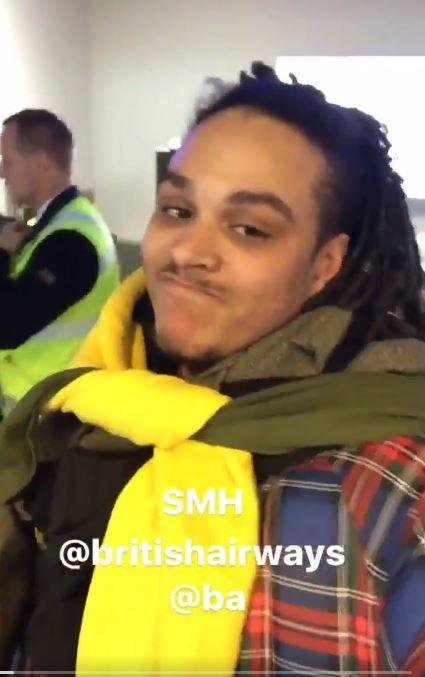 A British man attempted to wear all of his clothes because he said he couldn't afford a $125 baggage fee. Photo via Ryan Hawaii/Twitter

Jan. 17 (UPI) -- A British man was prevented from boarding a British Airways flight from Iceland to London after he attempted to wear 10 layers of clothes to avoid paying a baggage fee.

Ryan Carney Williams, who goes by the name Ryan Hawaii on social media, put on every article of clothing in his luggage while at the airport in Reykjavik last week after he was told he'd have to pay $125 to check a bag. But Williams said on Twitter that he didn't have the funds.

"I couldn't afford the fee as a result of being left homeless in Iceland for over a week," he wrote on Twitter.

In a video he posted online, Williams said that airline employees told him he'd be able to get on the flight if he put on all his clothes, which he did.

"They're really having me dress like this to go on, and they won't even let me go on," Williams said in the video.

But it turned out, bundling up didn't get him on the flight, either.

@British_Airways hi being held at Iceland Keflavik airport because I had no baggage put all the clothes on and they still won't let me on. Racial profiling? Or..... pic.twitter.com/NKgpe1cPFP

The next day, Williams tried to board a flight on easyJet, which normally charges fees for carry-on and checked bags -- and they didn't make an exception for Williams, even when he again tried to wear all of his clothes.

"The Captain and the ground crew were concerned about reports from the previous day so we provided a refund and he traveled with another airline," easyJet spokeswoman Ruth Bishop told The Washington Post in an email.

World News // 9 hours ago
EU moves to require universal charger for all mobile devices
Oct. 4 (UPI) -- The European Parliament has approved a new regulation that would require all mobile devices, cameras and tablets sold in the European Union to have USB Type-C charging ports by the end of 2024.

World News // 9 hours ago
Germany's move away from coal comes with a twist
Oct. 4 (UPI) -- German energy company RWE is phasing out coal early, but it will keep some plants with a heavy environmental footprint up and running.

World News // 10 hours ago
10 killed in avalanche in India
Oct. 4 (UPI) -- A massive avalanche killed at least 10 people and left many others stranded in India on Tuesday.