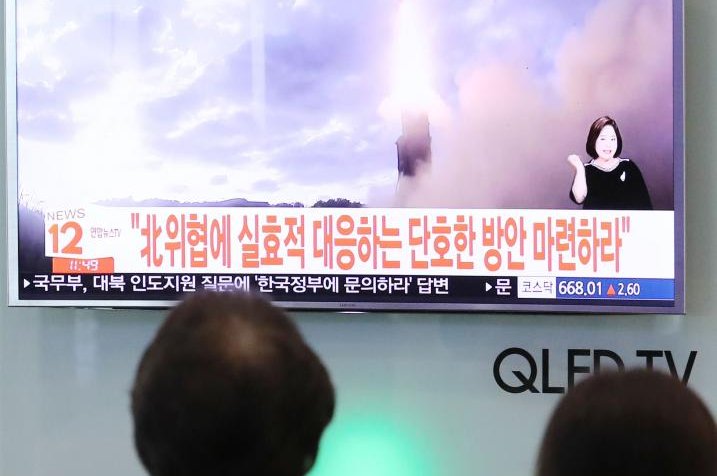 Sept. 15 (UPI) -- North Korea's latest launch of what is most likely a midrange ballistic missile over Japan is a sign Pyongyang is changing its strategy, and moving closer to perfecting an intercontinental ballistic missile capable of reaching the United States, analysts say.

Pyongyang had previously launched multiple missiles designed to land in the East Sea, or the Sea of Japan.

South Korean military experts say the test may have been a "tough choice" for Kim Jong Un, including the test in August of the Hwasong-12 that passed over Japan and landed in the Pacific Ocean.

But "once [Kim] decided, it is likely the future tests of midrange, long-range missiles will continue as planned," going deeper into uncharted waters, one South Korean military analyst told News 1.

Last month, the North Korean leader said his military should "continue to strive to launch ballistic rockets aimed for the Pacific Ocean," following the Aug. 29 test of the Hwasong-12.

Kim Dong-yup, professor at the Institute for Far East Studies of Kyungnam University in South Korea, said the missile path to the Pacific Ocean is a sign North Korea is carrying out practice for a "Guam siege plan."

North Korea's missile on Friday covered a distance of 2,300 miles, according to South Korea's military.

Following the missile launch on Friday, a spokesman for Pyongyang's foreign ministry warned the United States against any decision to relocate tactical nuclear weapons to the Korean peninsula.

"At a time when the Trump administration is fixated on imposing heinous sanctions on our republic and pursuing military threats, discussing the tactical nuclear weapons issue is an extremely dangerous move," the spokesman said on state-controlled KCNA.

World News // 1 hour ago
Airstrike kills dozens in Tigray region of Ethiopia
June 23 (UPI) -- An airstrike on a crowded market in northern Ethiopia on Tuesday killed at least 80 people and injured 43 others, the United Nations and witnesses said.

World News // 5 hours ago
Organizers bar consumption, sale of alcohol at Tokyo Summer Olympics
June 23 (UPI) -- With one month to go before the start of the postponed 2020 Summer Olympics in Tokyo, organizers are planning to unveil rules against several things to mitigate COVID-19 infections at the Games -- including no alcohol.

World News // 10 hours ago
Lebanon may need a savior, but it likely won't be Syria this time
BEIRUT, Lebanon, June 23 (UPI) -- Lebanon, which has for decades relied on outside powers to help solve its problems, is again waiting for "a savior" to pull it from its worst political and financial crisis since the 1975-90 civil war.

World News // 17 hours ago
Wassily Kandinsky painting thought lost for 70 years sells for $1.4M
June 22 (UPI) -- A watercolor painting by Russian artist Wassily Kandinsky believed to be lost for more than seven decades has sold at auction for $1.4 million.

World News // 1 day ago
Singapore woman receives 30-year prison term for death of Myanmar maid
June 22 (UPI) -- A Singaporean woman who beat and burned her housemaid from Myanmar with a clothing iron before choking her to death was sentenced to 30 years in prison.
Advertisement