North Korea is developing submarines because their deployment would give Pyongyang an advantage at sea, even when South Korea deploys “maritime patrol aircraft and destroyers,” a South Korean military official said Friday. File Photo by KCNA

Nuclear-powered guided missile submarines capable of launching covert attacks on the enemy, and staying submerged for more than a decade without refueling, can deter North Korea submarine-launched attacks originating from the south or southeast of the peninsula, South Korean newspaper Maeil Business reported.

The currently deployed radar of the U.S. missile defense system THAAD only monitors missiles originating from the north, and South Korea's Green Pine radar warning system are not sufficient for tracking submarine-launched attacks at sea, according to the report.

A South Korean military source told Maeil Business North Korea is developing submarines because their deployment would give Pyongyang an advantage at sea, even when South Korea deploys "maritime patrol aircraft and destroyers" in areas south of the peninsula.

Moon Geun-sik, a former South Korean Navy captain, said if South Korea acquires nuclear-powered submarines, they could be used to "go after submarines, after hiding near the enemy's submarine base."

"Even when the [South's] submarine is detected, it can maneuver quickly, thus increasing the chances of survival," Moon said.

North Korea is expected to deploy submarine-launched ballistic missiles in 1-2 years, but South Korea could take about five years to deploy nuclear-powered submarines, according to the report. 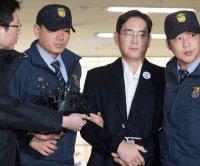 World News // 18 hours ago
Death toll in China's Henan Province at 302 after flash floods
Aug. 2 (UPI) -- More than 300 people are dead and 50 others missing in the aftermath of catastrophic flooding in central China, according to authorities in Henan Province.

World News // 19 hours ago
Firefighters among the dead in Turkey as crews battle major wildfires
Aug. 2 (UPI) -- More than 100 wildfires that have burned across Turkey have led to the deaths of several people -- including a couple of firefighters, officials said.

World News // 20 hours ago
North Korea warns of torrential rain after weeks of drought
Aug. 2 (UPI) -- North Korea said the country must prepare for typhoons and potential flooding in August after weeks of record-high temperatures that may have damaged crops. 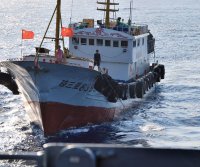