A young Syrian man receives medical treatment at a field hospital in July 2016. The Syrian civil war has devastated the country for more than half a decade. On Tuesday, a United Nations spokesperson said pro-regime forces are accused of carrying out "on the spot" extrajudicial killings of civilians. File Photo by Mohammed Badra/European Pressphoto Agency

ALEPPO, Syria, Dec. 13 (UPI) -- The United Nations said there are reports forces allied to Syrian President Bashar al-Assad have been killing civilians "on the spot" in a "complete meltdown of humanity" in Aleppo.

Colville said bodies lie in the city streets amid intense bombing. He said 11 women and 13 children were among those killed.

"In all, as of yesterday evening, we have received reports of pro-government forces killing at least 82 civilians in four different neighborhoods -- Bustan al-Qasr, al-Ferdous, al-Kallaseh, and al-Saleheen," Colville said at a press conference.

The Syrian Observatory for Human Rights said dozens have died as regime forces attempt to take full control of eastern Aleppo. At least 1,134 people have been killed, mostly civilians including children, since Assad's regime intensified efforts to capture east Aleppo on Nov. 15, the monitoring group said.

The Red Cross has called on warring sides to evacuate civilians out of east Aleppo before it is "too late."

"We need to act now," Red Cross spokesperson Pawel Krzysiek said. "We need to depoliticize the process of protecting civilians. We need to put their lives first. And we need to do it now before it is not too late."

The state-run Syrian Arab News Agency, or SANA, on Monday said the eastern section of Aleppo is 98 percent controlled by forces allied to Assad.

A spokesperson for former U.N. Secretary-General Ban Ki-moon on Tuesday said Moon is "alarmed over reports of atrocities against a large number of civilians, including women and children, in recent hours in Aleppo.

"While stressing that the United Nations is not able to independently verify these reports, the secretary-general is conveying his grave concern to the relevant parties," the spokesperson said in a statement. "The United Nations underlines the obligation of all parties on the ground to protect civilians and abide by international humanitarian and human rights law. This is particularly the responsibility of the Syrian government and its allies." 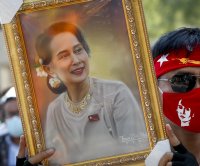 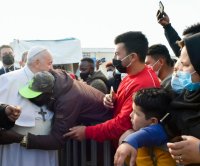 World News // 17 hours ago
Denmark, Britain head surge of COVID-19 Omicron variant from South Africa
Dec. 5 (UPI) -- Twelve days after the first COVID-19 Omicron case was reported in South Africa, the variant has spread to around 42 countries but no fatalities with Britain and Denmark hotspots.