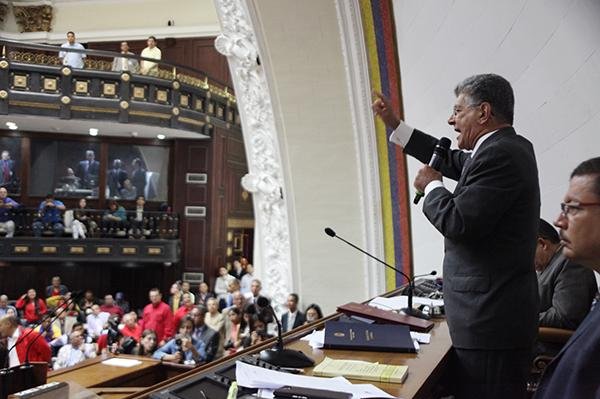 Henry Ramos Allup, leader of Venezuela's National Assembly legislature seen here during a session, on Wednesday said he would not attend an emergency government meeting he said was a "farce" called by President Nicolas Maduro because he would not be made a "fool." Photo courtesy of National Assembly

CARACAS, Venezuela, Oct. 26 (UPI) -- Henry Ramos Allup, leader of Venezuela's National Assembly legislature, on Wednesday rejected attending an emergency government meeting called by President Maduro because he would not be made a "fool."

Maduro on Wednesday held a meeting with Venezuelan government institutions, including the National Electoral Council and the Supreme Tribunal of Justice, but Allup -- the parliament's president -- did not attend the "farce" and instead participated in a protest against Maduro's regime.

Maduro on Tuesday said he would trigger Venezuela's Council for the Defense of the Nation, or CODENA, which the Venezuelan Constitution dictates should be activated during emergency crises. The meeting began at 11 a.m. on Wednesday in the presidential Miraflores Palace.

Allup said the CODENA meeting would only serve for the interests of Maduro's regime, which has accused the National Assembly of anti-democratic behavior -- an accusation the opposition-controlled unicameral parliament has also levied against Maduro's regime.

"I will not go because that meeting is to convert me into a kind of criminal to listen to the accusations made by the president or the military," Allup said. "And I will not lend myself to be a clown, because the clown is him, his ministers and all his military."

During the meeting, Maduro said he regretted that Allup did not attend -- adding that the National Assembly continues to be "in contempt."

"[Allup] knows I'm a man of dialogue," Maduro said. "Our Constitution has proved to be superior to all concepts of democracy."

The South American country is facing a political and economic crisis in which basic goods such as food and medicine are in short supply, unavailable or unaffordable. The United Nation's Economic Commission for Latin America and the Caribbean predicts Venezuela's gross domestic product will decrease 4 percent in 2017.

The CODENA meeting was called after National Assembly on Sunday declared Maduro's regime carried out a coup d'etat after the opposition's efforts to recall the embattled leader were postponed. On Tuesday, the parliament voted Maduro to stand trial on accusations that he violated the constitution to remain in power.

World News // 15 minutes ago
Suga tries to reassure Japan as approval rating falls
Jan. 18 (UPI) -- Under mounting criticism, Japanese Prime Minister Yoshihide Suga asked the legislature for patience Monday as he guided the country through the coronavirus pandemic in the middle of a struggling economy.

World News // 2 hours ago
Up to 12 possibly trapped after Russia avalanche
Jan. 18 (UPI) -- Russian emergency officials said up to 12 people may be missing after an avalanche struck a ski trail in the North Caucasus region Monday. World News // 10 hours ago
Lebanon's bank depositors dread losing life savings
BEIRUT, Lebanon, Jan. 18 (UPI) -- Bank depositors in Lebanon, who woke up one day more than a year ago to face the painful reality that their life savings are stuck in the banks, are now bracing for the worst: Most of their money, if not all, is gone and cannot be recovered.