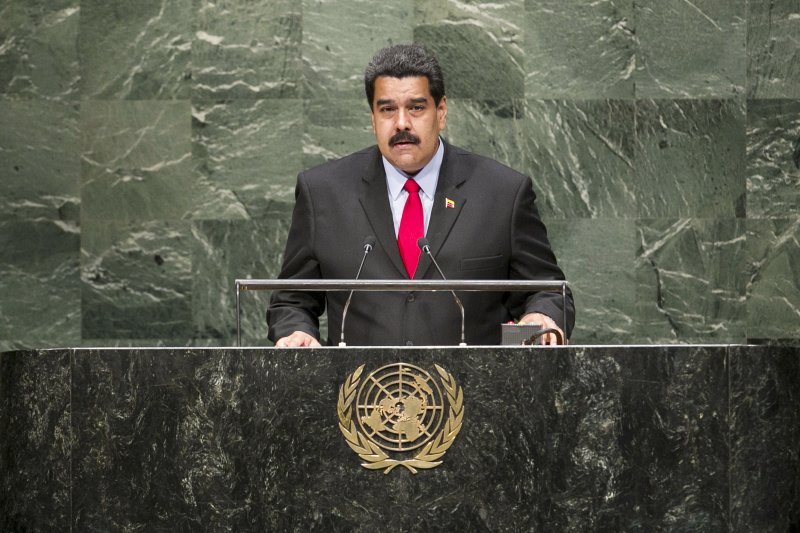 Venezuelan President Nicolas Maduro addresses the 69th Session of the General Assembly of the United Nations. His country is validating signatures on a refewrendum to recall him from office. UPI File Photo

CARACAS, Venezuela, June 21 (UPI) -- Venezuela's National Electoral Council has started the process of validating the identity of some 1.3 million voters who signed a petition in support of recalling President Nicolas Maduro.

The electoral body -- identified by the acronym CNE -- reportedly found widespread fraud, so is now checking the identity of every voter who signed the petition through Friday, Telesur reported.

Venezuela, which has the world's largest oil reserves, has been in economic crisis since oil prices plunged, leaving its citizens with shortages of basic necessities like food and medicine, and disatisfaction with Maduro.

RELATED 5 dead, 400 arrested in riots for food in Venezuela

The CNE, which has said MUD delivered 1.97 million signatures, has already invalidated 600,000.

Thousands of voters who signed the petition began lining up in the central Miranda state's El Hatillo municipality of the greater Caracas region at one of 125 centers the CNE set up for checking identities. By 1:30 p.m. Monday, about 530 of an estimated 4,000 in line had been able to validate their signatures. Many in the line, especially the elderly and disabled, complained about the slow pace of the process, Bloomberg reported.

"The process has been really complicated," said Miguel Castejon, a member of the opposition Primero Justica Party. "We have only two machines for all these people," said Castejon, who was helping coordinate the process.

The timing for all of this is important, since a recall this year, as the opposition wants, would allow for fresh elections. If the recall is pushed back until 2017, past Maduro's four-year mark in office, his vice president would take his place in the event of a recall.

Opposition Gov. Henrique Capriles said the opposition has support for a 2016 recall and urged Venezuelans who are eligible to validate their signatures to get in line and do so.

"The referendum is going to happen this year because that's what the majority wants," Capriles said during a news conference.

He said Venezuela has about seven times the signatures needed to move on with the referendum process.

World News // 1 day ago
Ukraine pulls remaining troops out of Severodonetsk
June 24 (UPI) -- After months of relentless shelling of Severodonetsk by Russian troops, Ukrainian officials said they will withdraw troops from the key eastern hub city on Friday.

World News // 1 day ago
At least 3 dead in Ecuador protest clashes
June 23 (UPI) -- Anti-government protests in Ecuador over rising costs in fuel, food and other basic needs have rattled the capital of Quito for days, leading to at least three deaths and hundreds of arrests.

World News // 1 day ago
8 sentenced for stealing Banksy mural honoring 2015 Paris terror attack victims
June 23 (UPI) -- A Paris court on Thursday sentenced eight men in the theft of a Banksy mural painted on the door of a concert hall that was the site of a terror attack in 2015 that killed 90 people.
Advertisement