ANKARA, Turkey, March 13 (UPI) -- At least 34 people are dead and 125 were wounded after an explosion near a main bus station in Ankara in the third major blast in the Turkish capital city since October.

Dogan News Agency said a suicide bomber crashed into a bus about 6:35 p.m. local time in Guvenpark. Several vehicles caught fire in the explosion and buildings were damaged.

Prime Minister Ahmet Davutoglu is convening an emergency security meeting. President Recep Tayyip Erdogan, who is in Istanbul, was briefed on the situation.

Officials are in the early stages of the investigation, so few details are immediately available.

No group has yet claimed responsibility, though early evidence revealed the bomber to be a woman and Turkish officials believe it might be the work of Kurdish militants.

The Peoples' Democratic Party condemned the bombing. The PDP is a Turkish pro-Kurd group often accused of being connected to the outlaw Kurdistan Workers' Party. The PDP said it shared "the huge pain felt along with our citizens".

Erdogan made it clear his government would use its military to prevent further attacks and vowed to bring "terrorism to its knees."

A Turkish court also banned social media, attempting to keep photos of the carnage from spreading.

The explosion comes amid growing tensions in the area. More than 100 people died in October when a bomb was detonated during a peace rally near the Ankara railway station. In February, 29 people were killed and 81 were injured when a suicide bomber targeted military personnel in the same area.

World News // 22 hours ago
WHO warns of 'immediate second peak' if restrictions eased too soon; global cases near 5.5M
May 25 (UPI) -- The World Health Organization on Monday warned there could be an "immediate second peak" of the coronavirus before there is a second wave amid a rash of countries and regions lifting lockdown restrictions.

World News // 10 hours ago
German government takes 20% stake in $10B Lufthansa bailout
May 25 (UPI) -- Lufthansa Group announced Monday that the airline will receive a $10 billion bailout from Germany, giving the government a 20 precent stake in the company and two seats on the airline's board.

World News // 19 hours ago
Ex-comfort woman decries 'betrayal' in South Korea activist scandal
May 25 (UPI) -- The former South Korean comfort woman who accused an activist of misappropriating funds said Monday she had been "betrayed overnight" after being "used" by lawmaker-elect Yoon Mi-hyang for three decades. 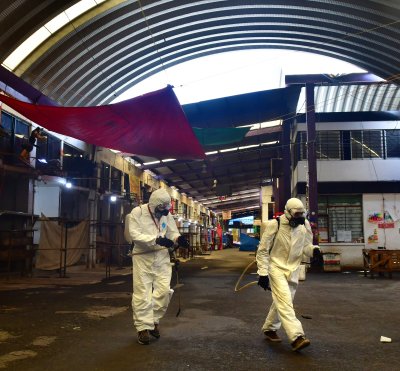