U.S. airplanes would typically need government approval to land in Iran due to sanctions.

TEHRAN, April 19 (UPI) -- An airplane owned by the Bank of Utah mysteriously showed up at an airport in Tehran, Iran, despite a ban on the U.S. doing business in the country.

The private aircraft, which bears a small U.S. flag, arrived at the Mehrabad Airport on Tuesday.

Brett King, one of the bank's executives in Salt Lake City, said the bank acted as a trustee for investors who have a financial stake in the plane.

“We have no idea why that plane was at that airport," he said.

Any U.S. aircraft would typically need prior approval from the Treasury Department's Office of Foreign Assets Control to set down in Iran.

Iranian officials aren't shedding any more light on the mystery.

“We don’t have any information in this regard. I refer you to the owner," said a spokesman for Iran's United Nations mission in New York.

Defense Secretary Hagel gets a horse from Mongolian hosts Boeing given license by U.S. to sell parts to Iran despite prior sanctions FAA says Boeing's 787 Dreamliner is safe Search for Malaysia Airlines aircraft expanded to Indian Ocean Chinese satellite may have spotted Malaysia Airlines debris

World News // 8 hours ago
Global number of refugees, forcibly displaced people passes 100M
May 23 (UPI) -- The number of global refugees and people forcibly displaced from their homes passed 100 million for the first time amid the war in Ukraine and other conflicts, the United Nation's High Commissioner for Refugees said.

World News // 12 hours ago
5.5-magnitude quake strikes in Japan off coast of 2011 Fukushima disaster site
May 23 (UPI) -- Scientists say that a strong earthquake was recorded off the coast of Japan -- near Fukushima, which was the site of a nuclear accident a decade ago that was triggered by a quake. 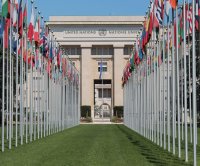