Cameron said NATO airstrikes would continue "as long as necessary," while offering help catching Gadhafi but not specifics on how to do so. "We will help you find Gadhafi and bring him to justice," Cameron said.

Cameron and Sarkozy, who appeared at a joint news conference, became the first Western leaders to visit Tripoli since rebels seized the capital.

NTC Chairman Mustafa Abdul Jalil, who appeared with the two leaders, said a delegation would go to Niger Friday to ask the nation's government to hand over Libyan officials who fled there, CNN reported. One of the deposed leader's sons, Saadi Gadhafi, is believed to be in Niger.

Cameron and Sarkozy played key roles in passage of a U.N. resolution that authorized a no-fly zone over Libya and participated in NATO air operations that destroyed much of Gadhafi's military power during the rebels' fight to oust him.

The visit Thursday is seen by observers as a sign of support for the transitional government after its top leaders left Benghazi for the capital.

At the news conference, Cameron pledged nearly $1 million for clearing landmines and another $1.5 million for disposal of dangerous weapons and said his country would sent a military advisory team to Libya for six months.

Sarkozy and Cameron said they would push for release of billions of dollars in Libyan assets frozen by U.N. sanctions against Gadhafi.

French news reports said Sarkozy also planned to visit Benghazi, the rebels' headquarters during the uprising, where some of the insurgent leadership were still based.

Meanwhile, residents were fleeing Bani Walid, one of Gadhafi's few remaining strongholds, ahead of a Thursday night deadline to leave the city, CNN reported. Libya's interim leaders gave Bani Walid residents a 48-hour notice to leave as more fighters were sent to buttress troops trying to take the town.

World News // 59 minutes ago
Indonesia hunts for survivors after deadly quake in Sulawesi
Jan. 15 (UPI) -- A search for survivors is underway in Indonesia after a 6.2-magnitude earthquake hit the country's Sulawesi Island.

World News // 22 hours ago
Election Day in Uganda: Rapper hopes to unseat sitting president
Jan. 14 (UPI) -- Ugandans went to the polls on Thursday to elect a president, with the incumbent leader -- who's ruled for nearly four decades -- facing a number of challengers, including a former rapper. 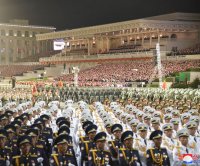