By Allen Cone and Daniel Uria
1/3

The House passed a stopgap spending bill Tuesday that the Senate will likely either reject or amend, meaning the House will have to address the legislation again. Photo by Pete Marovich/UPI | License Photo

The bill, which passed in the House by a vote of 245-182, would fund domestic government programs through March 23 while giving the Pentagon a full-year budget of $659 billion, up $52 billion from 2017.

"Our men and women in uniform aren't bargaining chips, and there's no reason for Senate Democrats to keep holding our military hostage for their political ploy," said AshLee Strong, a spokeswoman for House Speaker Paul Ryan, R-Wis.

House Democratic Leader Nancy Pelosi, D-Calif., said the bill was an attempt to slash funding for education, infrastructure and other domestic programs.

"Instead of working constructively with Democrats to meet the needs of the American people, Republicans are trying to starve the domestic budget," she said.

The bill will be sent to the Senate where Democrats are likely to reject or amend it and send it back to the House for another round of voting.

"Everyone understands that this will probably end up being a ping-pong situation" of legislation flip-flopping between the House and Senate, Rep. Carlos Curbelo, R-Fla., said Monday night. "And we'll see where the ball lands."

Senate Democratic leader Charles Schumer of New York said Democrats oppose the bill because they want to address all funding questions at the same time.

"As I've said many times before, a cromnibus will not pass the Senate," Schumer said Tuesday. "We want to fund defense, absolutely. We want to fund programs to help the middle class too, like education, like infrastructure, like scientific research. We're standing up and saying we must do both."

Earlier Tuesday, Schumer said Republican and Democratic leaders in the Senate were nearing agreement on a two-year budget bill to avoid another government shutdown.

Schumer met with Senate Republican leader Mitch McConnell of Kentucky in the Republican's office and told reporters before his floor announcement he had a "good meeting."

"There are still some outstanding issues to be resolved, but we are closer to an agreement than we have ever been," Schumer said on the Senate floor.

Unlike the House -- which needs a simple majority to approve legislation -- the Senate requires 60 votes, meaning help is needed from Democrats because the Republicans have a 51-49 edge in the upper chamber. Last month, the government closed and non-essential services ceased for three days when members of the two parties couldn't agree to a deal.

"There's no appetite for continuing that type of approach. I sincerely hope I never face that again," said Senate Democratic Whip Dick Durbin of Illinois said of another shutdown looming.

Last month, Senate Democrats agreed to keep the government running for two and-a-half weeks after ending their holdout to address the status of 800,000 undocumented immigrants who arrived in the United States as children. They supported a short-term spending bill that didn't address immigration because McConnell promised he would allow debate on immigration legislation.

Also, Congress needs to raise the borrowing limit in March. The Congressional Budget Office said last week the limit will be reached earlier than projected because of less revenue from the $1.5 trillion tax cut. The current level is $20.5 trillion.

"I'm pleased to report that our bipartisan talks are continuing to progress toward an agreement on spending caps and important priorities all of us are eager to address," McConnell said on the Senate floor Tuesday.

U.S. News // 3 hours ago
Tuskegee Airman Charles McGee dies at age 102
Jan. 17 (UPI) -- Brig. Gen. Charles McGee, a decorated Air Force pilot and one of the last surviving members of the Tuskegee Airmen, the all Black squadron of World War II, has died. He was 102.

U.S. News // 14 hours ago
Man drowns in Ohio River trying to save naked woman
Jan. 16 (UPI) -- A man who tried to save a naked woman who jumped into freezing and "turbulent" water of the Ohio River in Kentucky is believed to have drowned during his efforts Thursday, authorities said.

U.S. News // 15 hours ago
Extreme cold after major snowstorm to send Midwest, East into deep freeze
A brutally cold punch of Arctic air is expected to arrive in the United States next week, reinforcing winter across the Midwest and much of the East on the heels of this weekend's major snowstorm. 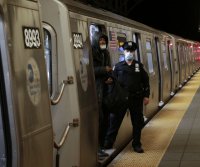