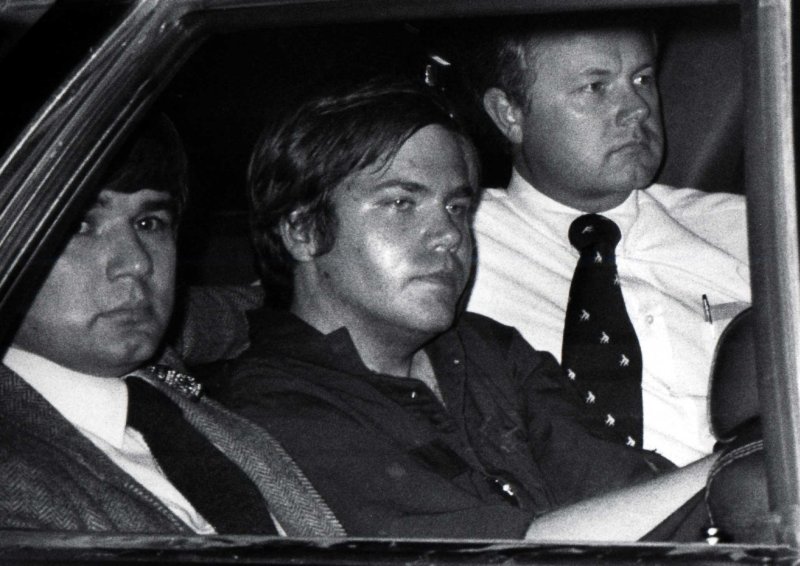 John Hinckley Jr. is flanked by federal agents as he is driven away from court April 10, 1981. The son of a former Colorado oilman, Hinckley was convicted in a 1982 trial than included evidence he shot Reagan in an effort to impress Jodie Foster, an actress he had never met. Hinckley, now 61, was released from St Elizabeths Hospital after nearly 35 years in psychiatric care. UPI Files | License Photo

WASHINGTON, Sept. 10 (UPI) -- After a 1981 attempt to assassinate President Ronald Reagan, John Hinckley Jr. was released on Saturday from St. Elizabeths Hospital, the psychiatric facility that has been his home for nearly 35 years.

A federal judge ordered Hinckley's release in July, saying the 61-year-old no longer posed a threat to himself or others.

Hinckley will reside with his mother, 90, in Williamsburg, Va., and will only be allowed to travel within a 50-mile radius of her home, as part of the conditions of his release. He is also required to carry a GPS-enabled phone, avoid government buildings and continue regular psychiatric treatment.

Hinckley has been spending up to 17 days per month with his mother as part of a gradual release over the past decade.

RELATED Secret Service agent who helped save Reagan dead at 85

A hospital official told The Washington Post that all patients scheduled to be released Saturday had been. An employee of the facility told The Telegraph, "John is gone."

All four survived, though Brady was confined to a wheelchair until his death in 2014, which was later declared a homicide.

Hinckley was found not guilty by reason of insanity following an eight-week trial in 1982.

He is ordered to have no contact with Foster, and the Reagan and Brady families.

U.S. News // 18 hours ago
Pentagon condemns rocket strikes near U.S. base in Syria
Nov. 26 (UPI) -- The Pentagon has condemned a rocket attack that targeted a U.S. military base in northeastern Syria on Friday night.

U.S. News // 19 hours ago
Train of storms to bring disruptive weather for the West into December
A train of storms will roll across the northwestern United States through much of the upcoming week, ushering in widespread rain and snow, forecasters said Saturday.

U.S. News // 21 hours ago
N.C. police seek suspect in Black Friday Walmart shooting that injured 1
Nov. 26 (UPI) -- Police said one person was hospitalized Friday after being shot inside a North Carolina Walmart store, triggering a chaotic scene just three days after six people were killed at a Walmart in Virginia.

U.S. News // 1 day ago
Human skull found in backpack off Oregon highway
Nov. 25 (UPI) -- Oregon State Police said a Department of Corrections cleanup crew discovered a human skull inside a backpack on Monday alongside the northbound lane of Interstate 5.
Advertisement