In 1790, merchant Robert Gray docked at Boston Harbor, becoming the first American to circumnavigate the globe. He had sailed from Boston in September 1787.

In 1849, William Hunt of New York patented the safety pin.

RELATED Sinking of the RMS Titanic

In 1925, The Great Gatsby by F. Scott Fitzgerald was published.

In 1942, the Bataan Death March, during which thousands of Filipinos and Americans died, began in the Philippines. Hoyt R. Haynie of El Dorado, Ark., who survived the 55-mile march, but saw many of his friends die, would later proclaim, "I'm an American, I'm proud to be an American and as far as I'm concerned, that's all there is to be."

In 1963, the U.S. nuclear submarine Thresher sank in the Atlantic Ocean 220 miles east of Boston. All 129 men on board were lost.

In 2010, Polish President Lech Kaczynski, his wife, Maria, and top government officials were among scores killed when their plane crashed while trying to land in a thick fog in western Russia.

In 2013, thousands of people massed at the U.S. Capitol, urging Congress to overhaul the immigration system to allow 11 million undocumented immigrants to attain legal status.

In 2014, CBS said Stephen Colbert would replace David Letterman on The Late Show when the longtime host stepped down in 2015.

In 2016, a fireworks explosion at the Paravur Puttingal Devi Temple in Paravur, India, left 106 dead and 400 injured.

A thought for the day: Pablo Casals said, "I feel the capacity to care is the thing which gives life its deepest significance."

World News // 22 minutes ago
North Korea may have mentioned 'opinion-driven' Twitter in newspaper
March 3 (UPI) -- U.S. social media platform Twitter may have been mentioned in North Korean state media, possibly for the first time, in an article that described in detail the role of the network in delivering "opinions and news." 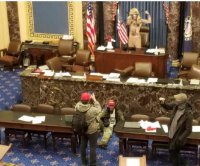 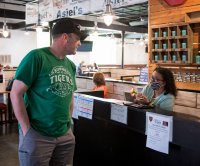 U.S. News // 3 hours ago
Texas small business owners worry about lifting COVID-19 restrictions
March 3 (UPI) -- Texas Gov. Greg Abbott's order will leave it to business owners to decide whether to require customers to wear masks inside their establishments. "It's putting us in the firing line," one owner said.

U.S. News // 4 hours ago
National security officials testify in Senate inquiry into Capitol attack
March 3 (UPI) -- Four national security experts appeared in Congress on Wednesday to face questions about the Jan. 6 U.S. Capitol attack, in the latest phase of the Senate's investigation of the assault.