NEW YORK, Aug. 2 (UPI) -- Denise Rich is being accused of having an employee make an illegal campaign contribution to Hillary Rodham Clinton.

The employee, Jimmy Hester, said he was the general manager of Rich's record companies until he was fired in February 2002. He charges that Rich fired him after learning he had AIDS, the New York Daily News reported.

The allegations are contained in a lawsuit filed by Hester Friday in Manhattan. The lawsuit alleges Rich demanded in October 1999 that he make a $2,000 contribution to Clinton's Senate campaign that would be refunded by her.

"It was clear that this demand was made so that Rich could disguise the source of the contribution," the lawsuit says.

Federal campaign laws prohibit secret contributions in the name of another.

Rich's spokesman, Howard Rubenstein, said his client was traveling and would not comment.

The ex-wife of Marc Rich has donated an estimated $1 million to Democratic causes.

Prosecutors have been investigating the presidential pardon of Marc Rich by Bill Clinton. 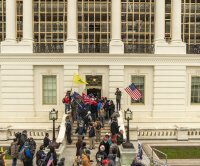 U.S. News // 4 hours ago
Navy discharges 45 sailors over refusing COVID-19 vaccine
Jan. 27 (UPI) -- The U.S. Navy said it has discharged 45 service members who refused to be inoculated against the COVID-19 pandemic.

U.S. News // 6 hours ago
U.S. warns of heightened businesses risks in Myanmar
Jan. 26 (UPI) -- Ahead of the one-year anniversary of the military seizing control of Myanmar in a coup, the Biden administration is warning Americans about the heightened-risk of doing in business in Asian nation.