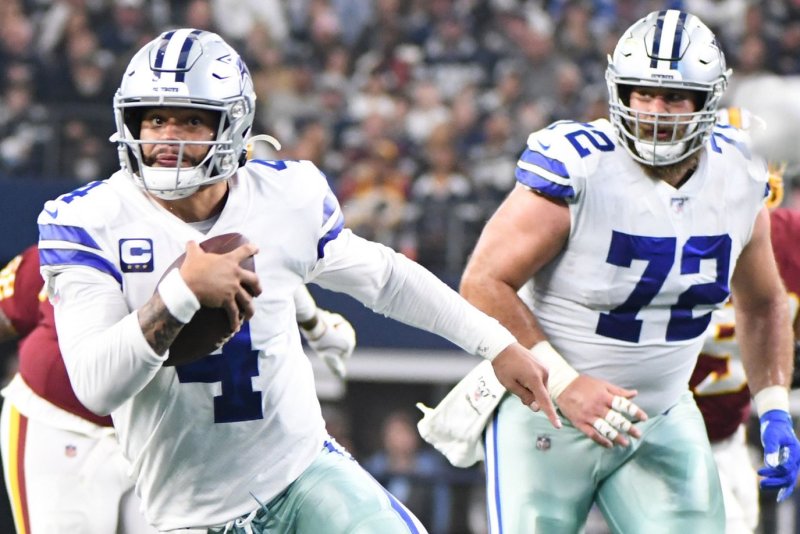 Dallas Cowboys quarterback Dak Prescott is expected to miss the rest of the season after he sustained a severe ankle injury Sunday in Arlington, Texas. File Photo by Lori Shepler/UPI | License Photo

Dallas Cowboys quarterback Dak Prescott completed 14 of 21 passes for 166 yards and an interception before he was forced out of his Week 5 start due to a broken ankle. File Photo by Matthew Healey/UPI | License Photo

Oct. 12 (UPI) -- Dallas Cowboys quarterback Dak Prescott had a succesful surgery on his broken ankle on Sunday after he sustained the injury during a win over the New York Giants. Prescott is likely out for the rest of the season.

"He is an inspiration to everyone he touches," Cowboys owner Jerry Jones said in a statement. "He has all of our love and support. And we have no doubt that he will return to the position of leadership and purpose that he brings to our team."

Prescott, 27, was off to a career-best campaign before the injury. He leads the NFL with 1,856 passing yards through Sunday's round of games.

He had also completed a career-best 68% of his throws and had nine touchdown passes and four interceptions before he broke his right ankle during a run in the third quarter of Sunday's win in Arlington, Texas.

Tears streamed from Prescott's face as he was surrounded by players from both teams, and was carted off the field at AT&T Stadium. The Cowboys said Prescott sustained a compound fracture and a dislocation of his right ankle.

The team also said he was transported to a local hospital and had surgery to "wash out the wound and fix the fracture" on Sunday night.

"Had to get this for @dak... we love ya boy" @michael13gallup | @thejaylonsmith | #DallasCowboys pic.twitter.com/SNox4YJmzl— Dallas Cowboys (@dallascowboys) October 12, 2020

Andy Dalton replaced Prescott as the Cowboys quarterback Sunday. He is expected to keep the job for the remainder of the season. Dalton completed 9 of 11 passes for 111 yards in relief of Prescott. He did not throw a touchdown or an interception.

NFL players and other professional athletes offered well wishes for Prescott on social media after he sustained the injury.

Devastated for @dak - one of the truly great people in the NFL— Troy Aikman (@TroyAikman) October 11, 2020

Prescott was playing on the franchise tag this season after he couldn't agree to a long-term contract extension last off-season with the Cowboys. He has a $31.4 million salary in 2020.

Prescott is expected to be released from the hospital Monday. The Cowboys (2-3) will host the Arizona Cardinals at 8:15 p.m. EDT Oct. 19 at AT&T Stadium.