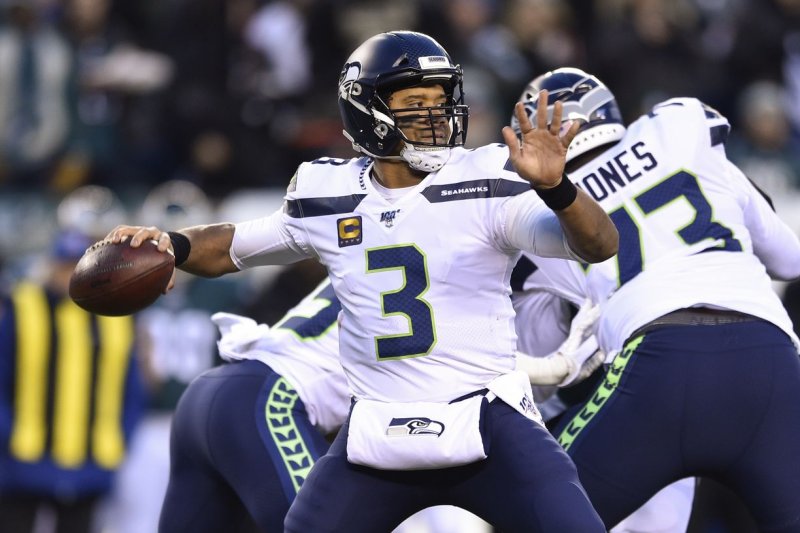 Seattle Seahawks quarterback Russell Wilson completed 20 of 32 passes for 217 yards and three scores in a win over the Minnesota Vikings on Sunday in Seattle. File Photo by Derik Hamilton/UPI | License Photo

Oct. 12 (UPI) -- Russell Wilson threw a fourth-down touchdown pass to D.K. Metcalf with 20 seconds remaining to lead the Seattle Seahawks to a one-point victory over the Minnesota Vikings in Seattle.

The NFL MVP front runner completed 20 of 32 passes for three touchdowns and an interception in the 27-26 win on Sunday at CenturyLink Field.

"It came down to a clutch moment," Wilson told reporters. "I just saw DK run across the field and tried to zoom it into there to him.

"It was a tight window. He made an unbelievable catch, unbelievable play. Our offensive line blocked extremely well in that position. It was a special time and a special moment for us."

Seattle trailed 13-0 at halftime before they rallied to move to 5-0 on the season for the first time in franchise history.

"With the quarterback we have, there's no doubt in our minds that we're not going to go down here and score," Metcalf said.

"Anytime we're in a that moment it's easy for us to just go out there and play our football because we know we've got a quarterback that can make anything possible, anything can happen. He can deliver when the game is on the line."

The Vikings used a 12-play, 6:12 drive to score a touchdown on the game's opening possession. Vikings running back Dalvin Cook ran in for an 8-yard score to end the drive. Vikings kicker Dan Bailey then made two field goals to secure Minnesota's two-score lead the break.

Seattle and Minnesota exchanged punts on the first two drives of the second half before Wilson threw a 19-yard touchdown pass to Will Dissly to make the score 13-7.

The Seahawks on the next possession sacked Kirk Cousins and forced a fumble before they recovered the ball on the Minnesota 15-yard line. Wilson threw a 13-yard touchdown pass to Metcalf two plays later to give Seattle a 14-13 lead.

Cousins threw an interception to K.J. Wright on the Vikings next drive. Seahawks running back Chris Carson ran for a 29-yard score on the next play to give Seattle a 21-13 advantage.

The Vikings answered with an 11-play, 72-yard scoring drive. Cousins ended the drive with a three-yard touchdown toss to Adam Thielen. Cousins and Thielen hooked up for a second score on Minnesota's next drive to give the Vikings a 26-21 lead with 7:13 remaining.

Vikings linebacker Eric Wilson intercepted Wilson on the next possession, but the Vikings were unable to capitalize on the rare mistake from the Seahawks quarterback. Minnesota turned the ball over on downs on the next drive.

Wilson and the Seahawks started the next drive on the Seattle 6-yard line. The star quarterback then orchestrated a 13-play, 94-yard drive, capped off with his game-winning strike to Metcalf.

Cousins completed 27 of 39 passes for 249 yards, two scores and an interception in the loss. Vikings running back Alexander Mattison had 20 carries for 112 yards.

Metcalf had six catches for 93 yards and two scores for the Seahawks.

"It's just we're so close and that's probably why it's so disappointing, it's so frustrating and it's humbling, honestly," Thielen said of the loss.

"But, we know if we can stick together, if we can keep going to work. ... We have the guys in this locker room, we have the coaches, we really care about one another and we're fighting to the end. I promise you that."

The Seahawks face the Arizona Cardinals at 4:05 p.m. EDT on Sunday at State Farm Stadium in Glendale, Ariz. The Vikings (1-4) host the Atlanta Falcons at 1 p.m. EDT Sunday at U.S. Bank Stadium in Minneapolis.

NFL // 4 days ago
Bucs' Rob Gronkowski retires, leaves door open for NFL return
June 22 (UPI) -- Tampa Bay Buccaneers tight end Rob Gronkowski retired from the NFL for a second time, he announced on social media. His agent later said he "wouldn't be surprised" if he came back in the middle of next season or in 2023.

NFL // 1 week ago
Coach Mike McCarthy fined, Cowboys lose OTA for practice violations
June 17 (UPI) -- The NFL fined Dallas Cowboys coach Mike McCarthy $100,000 and the team lost an organized team activity practice for next off-season due recent practices, which the league deemed to be too physical.

NFL // 2 weeks ago
Don Perkins, six-time Pro Bowl RB with Cowboys, dies at 84
June 10 (UPI) -- Former All-Pro running back Don Perkins, who spent his eight-year NFL career with the Dallas Cowboys, died at the age of 84, the team announced Friday.