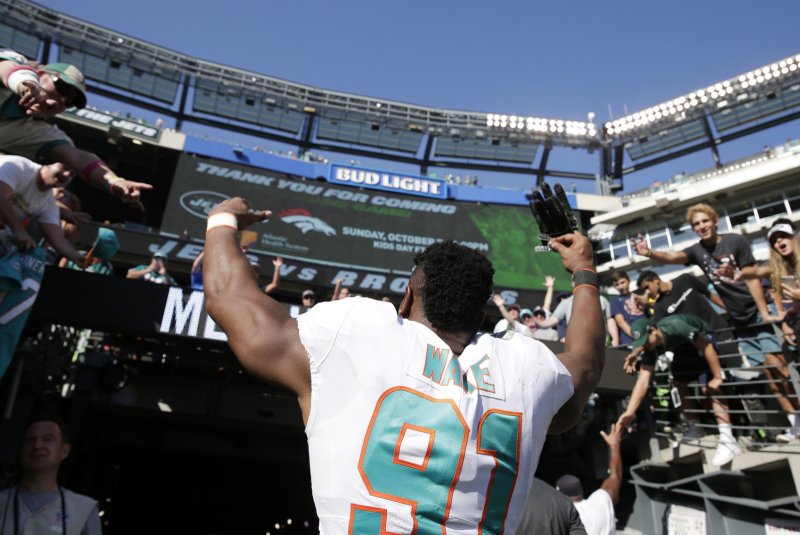 Miami Dolphins Cameron Wake walks off of the field after the game against the New York Jets in week 2 of the NFL season at MetLife Stadium in East Rutherford, New Jersey on September 16, 2018. The Dolphins defeated the Jets 20-12. Photo by John Angelillo/UPI | License Photo

The Miami Dolphins have ruled out five-time Pro Bowl defensive end Cameron Wake from Sunday's game at the Cincinnati Bengals because of a knee injury.

Wake, who has 12 tackles and a sack in four games this season, played through the injury during Miami's 38-7 loss at New England but did not practice this week.

Frederick has yet to play this season since he was diagnosed in August with Guillain-Barre syndrome, a rare disorder in which the body's immune system attacks the nerves.

The four-time Pro Bowl selection was kept on the 53-man active roster despite the fact there was no timetable for his return.

--Saints wide receiver Ted Ginn Jr. was ruled out of Monday night's game against the Washington Redskins in New Orleans because of a knee injury.

Ginn didn't practice this week and with the Saints off in Week 6, he could return for the game against the Ravens in Baltimore on Oct. 21.

Ginn has 12 catches for 135 yards and two touchdowns this season with 22 targets, third-most looks on the team to Alvin Kamara (47) and Michael Thomas (44). Only Thomas (three) has more TD receptions.

--The San Francisco 49ers could be without key players on both sides of the ball for Sunday's game against the visiting Arizona Cardinals.

Cornerback Jimmie Ward was unable to practice Friday after injuring a hamstring in Thursday's practice and was among seven San Francisco players listed as questionable for Sunday's matchup.

San Francisco also could be without starting cornerback Richard Sherman, who was limited in practice Friday after sitting out last week's game against the Los Angeles Chargers because of a calf injury.

--Cincinnati Bengals running back Joe Mixon is not expected to receive a full workload in his first game back from injury.

Bengals coach Marvin Lewis told the Cincinnati Enquirer that there will be some limitations placed on Mixon for Sunday's matchup against the Miami Dolphins because of a lack of conditioning while rehabbing his knee injury.

Mixon sat out the past two games after undergoing a procedure to repair a slight meniscus tear in his right knee. He was hurt in Cincinnati's 34-23 victory over Baltimore in Week 2.

The move came one day after King was listed as doubtful for Sunday's game against the New York Jets because of a right thigh injury.

Colby Wadman, who was signed to Denver's practice squad on Sept. 25, will be promoted to the active roster and start against the Jets, the newspaper reported, citing a source.

NFL // 5 days ago
All-Pro LB Fred Warner agrees to 5-year, $95 million extension with 49ers
July 21 (UPI) -- The San Francisco 49ers are signing All-Pro defender Fred Warner to a multiyear contract extension that will make him the highest-paid inside linebacker in the league.
Advertisement