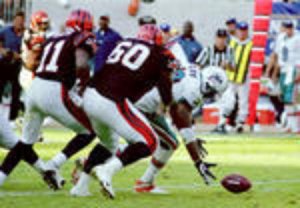 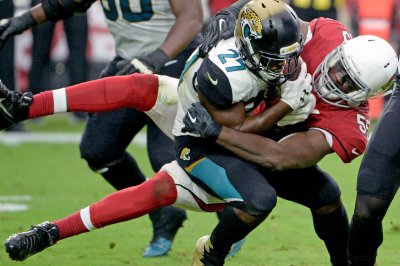 NFL // 2 years ago
Cardinals DE Jones: 'I'm not doing enough'
Arizona Cardinals defensive end Chandler Jones arguably is in the midst of the best all-around season of his seven-year career, but he's not enjoying it.

NFL // 2 years ago
NFL notebook: Dolphins' Wake out with knee injury
The Miami Dolphins have ruled out five-time Pro Bowl defensive end Cameron Wake from Sunday's game at the Cincinnati Bengals because of a knee injury.

NFL // 2 years ago
Jason Taylor: Out of spotlight, NFL players humbly support communities
Dolphins legend Jason Taylor is known for helping revolutionize the NFL, but he is lesser known as one of football's most charitable players. He's OK with that.

NFL // 3 years ago
Miami Dolphins' defense sends Denver Broncos to eighth straight loss
Miami's swarming defense held Denver out of the end zone and scored twice to lift the Dolphins to a 35-9 win over the Broncos on Sunday at Hard Rock Stadium.

Jason told me, 'Tell the Dolphins whatever fits their budget,

I am extremely humbled to receive an award bearing Walter Payton's name. He embodied everything an NFL player should aspire to be on and off the field

If we were to think of output per day, our economy produces over $30 billion on average each day

Jason Paul Taylor (born September 1, 1974 in Pittsburgh, Pennsylvania) is an American football linebacker who is currently a free agent in theNational Football League. He was drafted by the Miami Dolphins in the third round of the 1997 NFL Draft. He played college football at Akron.

A six-time Pro Bowl selection, Taylor was named the NFL Defensive Player of the Year in 2006, and is the NFL's all time leader in fumble return touchdowns (6).

Taylor has also played for the Washington Redskins and the New York Jets.

FULL ARTICLE AT WIKIPEDIA.ORG
This article is licensed under the GNU Free Documentation License.
It uses material from the Wikipedia article "Jason Taylor."
Back to Article
/