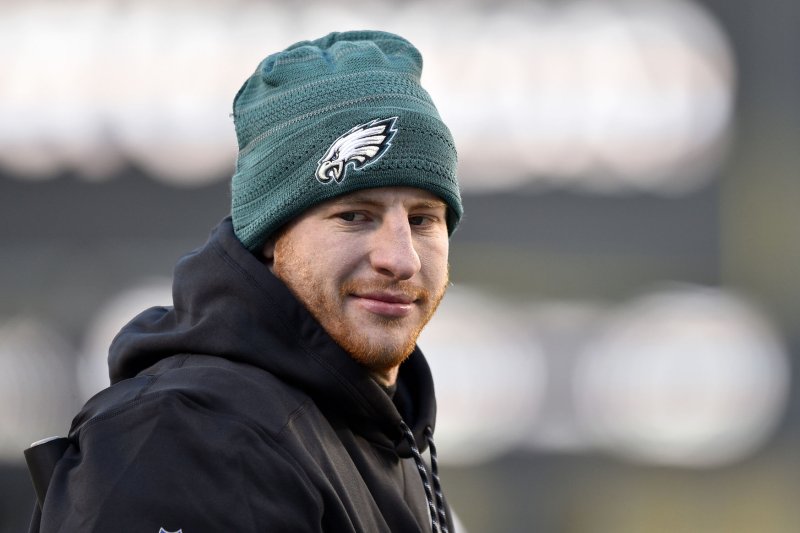 Philadelphia Eagles quarterback Carson Wentz stands on the sidelines prior to an NFC Divisional Round playoff game against the Atlanta Falcons on January 13, 2018 at Lincoln Financial Field in Philadelphia. Photo by Derik Hamilton/UPI | License Photo

Philadelphia Eagles quarterback Carson Wentz said he doesn't plan to change his playing style once he returns from his ACL injury.

The headstrong Wentz, however, will hear a familiar voice bidding to change his stance, courtesy of coach Doug Pederson.

"I'm going to sit down and talk to him," Pederson said, via Philly.com. "Longevity is everything in this business. Learn from the best. Learn from Tom Brady, who got hurt early in his career. And learn from guys that have done that and yet still went on to have great careers and long careers."

Former Eagles offensive coordinator and current Indianapolis Colts coach Frank Reich said he couldn't get through to Wentz on this topic.

"Definitely went in one ear and out the other," Reich said recently, per the website. "It didn't go exactly like this, but this is just made up to protect the innocent or protect the guilty, however you say it. We would say to him, 'Hey, you just need to kind of back off on some of this tackling stuff.'

"And he didn't quite say it like this, but it was essentially, 'No. I'm not backing off. This is me. This is how I play.'"

The Eagles haven't publicly set a timetable for Wentz's return, but the 25-year-old has said that his goal is to be ready for the season opener.

Wentz injured his left knee against the Los Angeles Rams and underwent surgery on Dec. 13.

He was hurt as he took a big hit on a third-quarter touchdown run that was called back because of a penalty. He came up limping after absorbing multiple hits on the run but stayed in the game and threw a three-yard touchdown pass to Alshon Jeffery four plays later to give the Eagles the lead.

Wentz threw for 33 touchdowns this past season to move past Sonny Jurgensen for the most in a single season in franchise history, a record that stood since 1961. Wentz completed 60.2 percent of his passes for 3,296 yards with just seven interceptions in 13 games in 2017.

Wentz has 49 touchdown passes and 21 interceptions since being selected with the second overall pick of the 2016 NFL Draft.

NFL // 14 hours ago
Saints waive WR Kenny Stills after drop vs. Cowboys
Dec. 8 (UPI) -- The New Orleans Saints waived wide receiver Kenny Stills less than a week after his dropped pass led to an interception by the Dallas Cowboys.