Pederson is confident the other one could have done the very same had he not been injured.

"Listen, Carson Wentz was the MVP talk of the league last year," Pederson said on The Rich Eisen Show on Wednesday. "And I truly believe if he's healthy, I still feel strongly that we would probably (be) in the Super Bowl and win the Super Bowl with Carson, and he's the MVP. That's just the way he played last year.

"He's a big reason -- he's not the only reason -- but he's a big reason why we were, I believe, 11-2 at the time, playing the Rams, and won the NFC East. For me, being a former quarterback to have two guys and really three guys, you throw (Nate Sudfeld) in there, but you're talking about Nick (Foles) and Carson who you just don't bat an eye with either one of these guys. The way they prepare, the way they study, their demeanor on the field, their leadership styles. It's a blessing to have two veteran guys like that and now have a Super Bowl MVP as your backup."

Wentz has penciled in his return for the 2018 season opener and is adamant that he won't change how he plays after tearing the ACL and LCL in his left knee.

Pederson, however, wouldn't put a timeline on Wentz's return.

"You know, we're optimistic, obviously," Pederson said. "I don't want to put a timetable on him. Obviously, he's working extremely hard. He's in the weight room. He's getting his rehab done. He's looking good, but at the same time, I'm not going to rush him -- like we did with Sidney Jones (this season) -- I don't want to put him out there if he's not 100 percent. So, (I'm) optimistic that that could come to fruition. But again, we'll be smart about it, and we'll put him out there when he's ready."

Wentz has shed the crutches and was throwing on the field prior to Super Bowl LII. Foles, however, led the Eagles to a 41-33 victory over the Patriots.

Wentz threw for 33 touchdowns this year to move past Sonny Jurgensen for the most in a single season in franchise history, a record that stood since 1961. Wentz completed 60.2 percent of his passes for 3,296 yards with just seven interceptions in 13 games in 2017.

For his two-year career, he has 49 touchdown passes and 21 interceptions.

Foles' career has seen plenty of ups and downs as he threw for 27 touchdowns against two interceptions during the 2013 season. He was traded to the then-St. Louis Rams in 2015, but released after one season. Foles then headed to Kansas City and was released before returning to Philadelphia as Wentz's backup.

NFL // 13 hours ago
49ers stun Packers in 4th quarter, clinch NFC title game berth
Jan. 22 (UPI) -- The San Francisco 49ers moved one step closer to their second Super Bowl appearance in three seasons with a 45-yard field goal as time expired for a 13-10 upset win over the Green Bay Packers in the divisional round.

NFL // 17 hours ago
Bengals upset top-seeded Titans with last-second FG, reach AFC title game
Jan. 22 (UPI) -- The Cincinnati Bengals beat the Tennessee Titans 19-16 in the divisional round Saturday at Nissan Stadium to advance to their first AFC Championship Game since 1988. 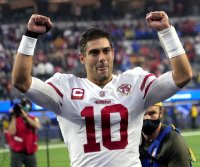 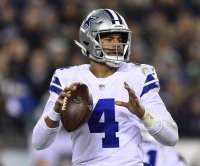 NFL // 3 days ago
Bengals-Titans, 49ers-Packers start weekend's NFL divisional round
MIAMI, Jan. 20 (UPI) -- The Tennessee Titans host the Cincinnati Bengals on Saturday in the first divisional round of the 2022 NFL playoffs. Six more teams will take the field to determine who plays in the respective AFC and NFC title games.
Advertisement