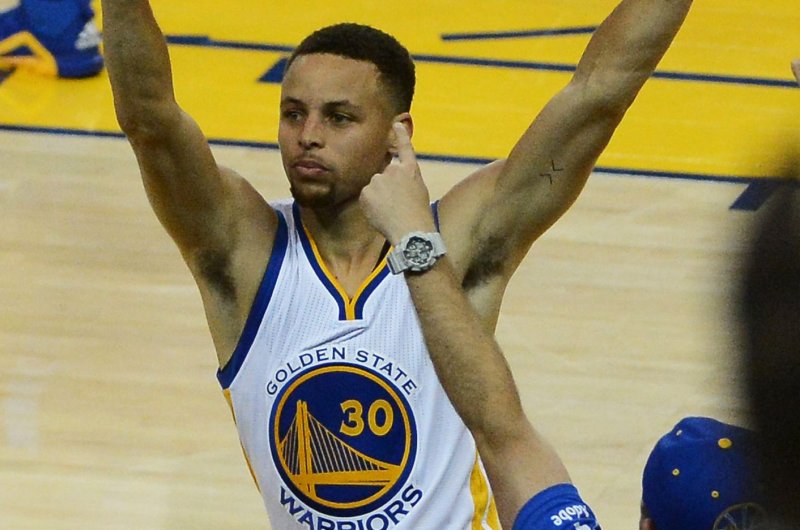 OAKLAND, Calif. -- Stephen Curry bombed in six 3-pointers in the first quarter Wednesday night, paving the way to a 39-point performance that propelled the Golden State Warriors to a 126-111 thumping of the Charlotte Hornets.

Thompson finished with 29 points and tied a career-high with eight assists, and Kevin Durant added 18 points, helping the Warriors (42-7) record a sixth straight win over the Hornets and an eighth in a row at home against Eastern Conference competition this season.

The rematch of a tight Golden State win at Charlotte last Wednesday was never close, with Curry hitting 27- and 26-footers in the first 98 seconds to give the Warriors a lead they never relinquished.

Curry scored 18 first-quarter points, all on 3-pointers, and Thompson chipped in 11 as Golden State built a 31-11 lead en route to a 41-21 advantage at period's end.

The Warriors made nine 3-pointers and just six 2-pointers in the quarter.

Thompson hit three more threes and Curry a pair in the second period, during which the Warriors went up by as many as 24 points before settling into a 77-56 halftime advantage.

By game's end, Draymond Green had a pair of threes and two teammates had one apiece as Golden State got within three of the NBA record of 24.

The Warriors' biggest lead of the game was 32 points.

Green lead all rebounders with 10.

Marco Belinelli had 16 points, Marvin Williams 14 and Nicolas Batum 13 for Charlotte, which lost for the second time on a three-game Western swing that concludes Saturday night at Utah.

The Hornets played without center Cody Zeller, out with a deep quadriceps bruise. Charlotte has gone 1-11 in his absence this season.

The Hornets countered the Warriors' 21 3-pointers with just nine of their own on 30 attempts.

All-Star guard Kemba Walker didn't have any of Charlotte's nine 3-pointers, snapping a streak of at least one in 27 straight games. He finished with a season-low seven points, failing to reach double figures for the first time this season.

NOTES: The Hornets' record for consecutive games with a 3-pointer is 46, held by former Warriors PG Baron Davis. ... The NBA announced that the Warriors' Steve Kerr was selected Western Conference Coach of the Month for January, during which Golden State had a plus-14.1 point differential in 14 games. Kerr also earned the honor for October/November. ... The Warriors' 12-2 mark in January gave them their 24th consecutive winning month, the longest active streak in the NBA. ... The Warriors played without C Zaza Pachulia (strained right rotator cuff) and backup PG Shaun Livingston (sore back). Pachulia is expected to miss at least one week.

NBA // 6 hours ago
Nets owner supports staff amid Kevin Durant trade demand
Aug. 9 (UPI) -- Brooklyn Nets owner Joe Tsai voiced support for the team's front office and coaching staff amid trade demands from Kevin Durant and a reported ultimatum the star player issued in order for him to stay with the team.