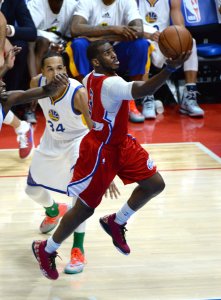 NBA // 2 years ago
Kevin Durant injury alters betting odds of Warriors return, Knicks acquisition
Kevin Durant's unfortunate Achilles rupture during the 2019 NBA Finals has altered the betting odds when it comes to his next destination.

NBA // 2 years ago
Warriors' DeMarcus Cousins out again with ankle injury
The Golden State Warriors will be without their top big man, DeMarcus Cousins, tonight when they face the Timberwolves in Minnesota.

Livingston was born in Peoria, Illinois. He led Concordia Lutheran Grade School, coached by Mr. Tom Ruppert, to LSA state titles in 1999 and 2000. Livingston played competitive basketball in high school at Richwoods High School for two years and then transferred to Peoria Central High School, where he led his team to Class AA state titles in 2003 and 2004.

He played in the 2004 McDonald's High School All-American game, and was named co-MVP of the game.

FULL ARTICLE AT WIKIPEDIA.ORG
This article is licensed under the GNU Free Documentation License.
It uses material from the Wikipedia article "Shaun Livingston."
Back to Article
/