Mets, Jays both aiming to rebound from losses 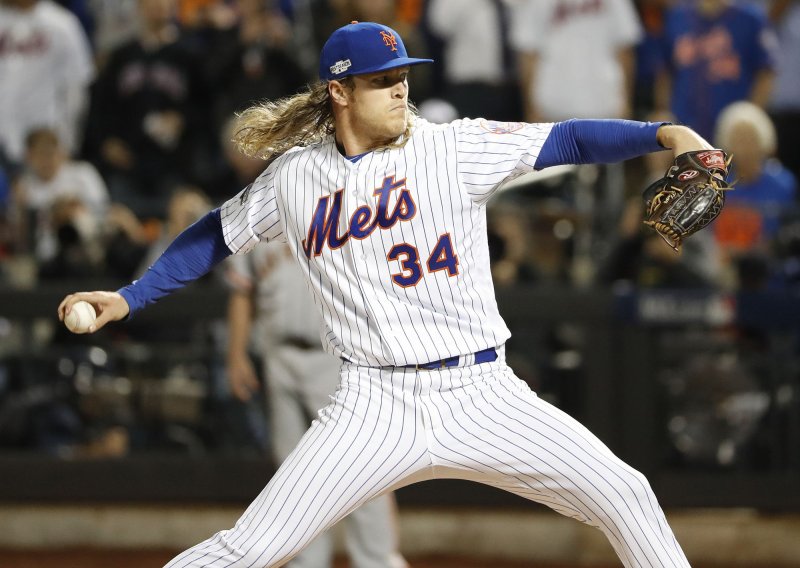 NEW YORK -- A pair of teams looking to regain the form they displayed in the opening weeks of the season will meet Tuesday night, when the New York Mets host the Toronto Blue Jays in the opener of a brief two-game interleague series at Citi Field.

Both teams were off Monday after losing Sunday. The visiting Mets fell to the Philadelphia Phillies, 4-2, while the host Blue Jays were beaten by the Boston Red Sox, 5-3.

RELATED Struggling Darvish gets start for Cubs in Atlanta

A sputtering offense has been an issue for both teams. The Mets have scored three runs or fewer 16 times in the last 25 games, including each of the last four.

"I don't think our team is built for just putting together hit after hit after hit and going 1st to 3rd and things like that," rookie Mets manager Mickey Callaway said following Sunday's loss. "I think when the home runs start to come, that's when you're gonna see the team we are."

The Mets entered Monday tied for 11th in the National League with 37 homers, including just 11 since May 1.

The Blue Jays entered Monday ranked fourth in the majors with 56 homers but have been limited to three runs or fewer 12 times in the last 24 games.

"There are a few guys in the lineup who are cold, no doubt," Blue Jays manager John Gibbons told reporters Saturday. "You're definitely going to go through that at times."

Syndergaard will be pitching for the first time since May 6, when he didn't factor into the decision after giving up two runs over six innings in the Mets' 3-2 loss to the Colorado Rockies. Syndergaard was scheduled to pitch against the Phillies Saturday night but was pushed back after he warmed up prior to the game being postponed due to rain.

Garcia didn't factor into the decision last Wednesday, when he gave up two runs (one earned) over five innings in the Blue Jays' 5-2 win over the Seattle Mariners.

Syndergaard will be making his second career start against the Blue Jays, who drafted him in the first round of the 2010 draft and traded him to the Mets in a trade that netted Toronto reigning Cy Young Award winner R.A. Dickey in December 2012. Syndergaard didn't factor into the decision on June 15, 2015, when he gave up one run while striking out a then-career-high 11 batters over six innings.

The rare visit to Queens for the Blue Jays will serve as a homecoming for Toronto outfielder Curtis Granderson, who will play at Citi Field for the first time since the Mets traded him to the Los Angeles Dodgers last August. Granderson helped New York to a World Series and a wild-card berth during his three-plus seasons with the club.

The Blue Jays learned Monday they will be without closer Roberto Osuna for at least another week. Osuna was arrested for assaulting a woman the morning of May 8 and was immediately placed on administrative leave, which was scheduled to expire Monday before it was extended to May 21.

MLB // 7 hours ago
Blue Jays to migrate from Florida to New York for home games
May 5 (UPI) -- The Toronto Blue Jays, who started the 2021 MLB season with home games in Dunedin, Fla., will move their temporary home to Sahlen Field in Buffalo, N.Y., on June 1, the team announced Wednesday.

MLB // 10 hours ago
Braves' Ronald Acuna Jr. hits 407-foot, league-high 10th homer vs. Nationals
May 5 (UPI) -- Ronald Acuna Jr. sparked the Atlanta Braves to a 6-1 win over the Washington Nationals with his league-leading 10th home run of the season.

MLB // 11 hours ago
MLB suspends Reds' Amir Garrett for 'inciting' Cubs incident
May 5 (UPI) -- Cincinnati Reds pitcher Amir Garrett received a seven-game suspension and was fined for "inciting a benches-clearing incident" in a game against the Chicago Cubs, MLB said.

MLB // 1 day ago
White Sox OF Luis Robert out 3-4 months due to hip flexor tear
May 3 (UPI) -- Chicago White Sox outfielder Luis Robert will be out for an extended period of time after suffering a complete tear of his right hip flexor.

MLB // 2 days ago
Umpires overturn Phillies homer in 9th to hand Mets 8-7 victory
May 3 (UPI) -- An eighth-inning offensive barrage and an overturned home run led to a dramatic New York Mets win on the road Sunday night over the Philadelphia Phillies.