Aug. 4 (UPI) -- Authorities responded to an apartment complex in Florida when an alligator wandered into a building and trapped some residents inside an elevator.

The Lee County Sheriff's Office said two deputies responded alongside a trapper when a call came in about an alligator inside a building at the Estero Parc apartment complex in Lee County.

The sheriff's office said residents ended up trapped inside the elevator when they found the alligator blocking the door.

"Deputies responded and isolated the alligator until a certified trapper arrived and humanely removed the gator," the sheriff's office said. "The apartment complex community was extremely thankful for the deputies response." 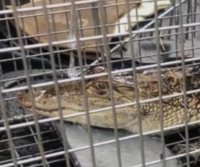 Odd News // 15 hours ago
Orangutan dons zoo visitor's dropped sunglasses
Aug. 4 (UPI) -- A visitor to a zoo in Indonesia captured video when her sunglasses fell into an enclosure where they were soon donned by a fashion-forward orangutan.