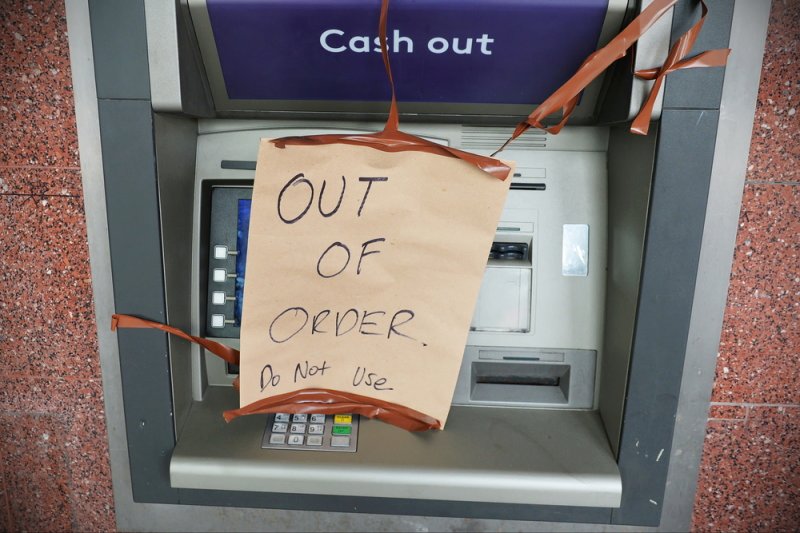 A Nebraska farmer draining a pond on his property for maintenance discovered someone had thrown an ATM into the water. Photo by 1000 Words/Shutterstock.com

July 6 (UPI) -- A Nebraska farmer draining a pond on his property for maintenance made a surprising and unusual discovery: an ATM dumped in the water.

Wynn Hall of Exeter said he started the process of draining the pond, which is used for pumping waters off his fields, and checked on it the following morning.

Hall said he initially thought the object stuck in the mud was a household appliance.

"I thought who would throw a refrigerator or a stove and put it in the pond, in fact, the deepest part of the pond in fact...why would that be down there," Hall told KOLN-TV.

Hall said it wasn't until he took a photo of the object that he was able to identify it.

"I took a picture and zoomed in on it and thought, 'That looks like an ATM,'" Hall said.

The farmer said he doesn't know how long the ATM was in his pond, since he didn't drain it in 2019, but it didn't appear to have been in the water for more than a few weeks.

Hall contacted the Fillmore County Sheriff's Office, which sent a team to haul the ATM away. He said deputies told him an ATM had recently been stolen in the area.

The ATM wasn't the only unusual stolen item to turn up in a body of water recently -- a South Carolina boy magnet fishing in Whitney Lake in May pulled up a large metal item that turned out to be a heavy safe. The safe landed by Knox Brewer, 6, was stolen from a neighbor's home eight years earlier.