"I can confirm this will be my final season as Michonne on the show." - @DanaiGurira #TWD #SDCC pic.twitter.com/gTm6qhojEg— The Walking Dead AMC (@WalkingDead_AMC) July 19, 2019

July 19 (UPI) -- Danai Gurira announced at San Diego Comic Con on Friday that she is leaving The Walking Dead.

"I can confirm this will be my final season as Michonne on the show," the actress said during a panel discussion with her co-stars.

Michonne is an iconic, katana-wielding warrior and community leader on AMC's zombie-apocalypse drama.

She was the romantic partner of Andrew Lincoln's Rick Grimes until Lincoln departed in Season 9.

Lincoln's character will star in a series of movies, the first of which will be released in theaters as opposed to on television.

A teaser for the as-yet-untitled film was played at Comic Con.

"Rick Grimes Returns. Only in theaters," it teased, while the TV show's haunting opening theme music by Bear McCreary played in the background. 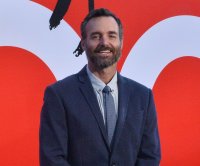