'Y&R' vet Doug Davidson: 'My contract was not renewed in January'

Doug Davidson and wife Cindy Fisher arrive for the Daytime Emmy Awards in Beverly Hills on June 16, 2013. Davidson said his contract was not renewed on "The Young & the Restless" this year. File Photo by Jim Ruymen/UPI | License Photo

Actor Doug Davidson and actress Michelle Stafford arrive at a photocall for "The Young & the Restless" during the 49th Monte Carlo Television Festival on June 9, 2009. File Photo by David Silpa/UPI | License Photo

Sept. 13 (UPI) -- Doug Davidson said he hasn't been outright fired from The Young & the Restless after 40 years, but fans shouldn't expect to see much of him in the future.

"My contract was not renewed in January, and I went on recurring status, but as it stands now I have only two shows left to air and no new dates," Davidson told Soap Opera News.

The actor said he thinks his character Paul Williams still has a story to tell.

"We are only limited and freed by the writing. There is ALWAYS story. The writers are focused in a different direction. I understand that," he said. "It's hard for me not to be emotional, period, in any circumstance, but I've been doing this show so long, I can't help but be subjective."

Members of the soap community rallied around Davidson on Twitter when they heard of his predicament.

Rocker and General Hospital alum Rick Springfield tweeted a link to a petition to keep Davidson on Y&R.

"@DougDavidsonYR is my best friend forever and was the best actor and mainstay character on the show. An Emmy winning great human being, a truthful actor with an open heart. Another show needs to snap this giant hearted brilliant actor up! Xooxx," Springfield wrote.

"This is an absolute travesty. What is going on over there? This man has not only acted his ass off at #YR for 40 years but is a man of the utmost integrity. I am saddened by this news. Much love, Doug!" Stephen Nichols from GH said in his own post.

Reacting to the outpouring of online fan love he has been receiving this week, Davidson wrote: "You all are so wonderful. I so appreciate your support and kindness and love. Thanks for a fabulous career."

TV // 37 minutes ago
Perry Mattfield: 'In the Dark' reinvents itself in Season 3
LOS ANGELES June 23 (UPI) -- "In the Dark" star Perry Mattfield discusses the changes facing her character, Murphy, in the CW drama's third season. 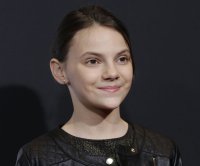 TV // 17 hours ago
Lorde on revealing album art: 'Do it while you've got it'
June 22 (UPI) -- Lorde discussed her new album "Solar Power" and the inspiration behind the project's revealing cover while appearing on "The Late Show with Stephen Colbert."