"And that's a wrap!" the filmmaker said alongside a photo of a clapperboard used on set featuring the logo for Shazam!: Fury of the Gods.

Zachary Levi returns as the title character, who is actually teenager Billy Batson who can transform into an adult superhero by uttering the word "shazam." Asher Angel portrays Billy.

Each of Billy's foster siblings can also transform into superheroes, who are portrayed by Fulton, Adam Brody, Megan Good, Ross Butler and D.J. Cortona.

Helen Mirren will portray the villain Hespera, a daughter of Atlas in the sequel. She will be joined by Lucy Liu and Rachel Zegler as fellow daughters of Atlas.

Shazam! Fury of the Gods is set to hit theaters on June 2, 2023. The first Shazam! film was released in March 2019 and also starred Mark Strong and Djimon Hounsou as the wizard Shazam, who grants Billy his powers.

Shazam! Fury of the Gods will be a part of DC's virtual FanDome event on Oct. 16. The show will also include looks at The Batman, Black Adam, The Flash and more.

Helen Mirren to play villain in 'Shazam!' sequel 'Shazam! Fury of the Gods' director unveils new costumes What to watch next: Sign up for UPI's Streaming newsletter 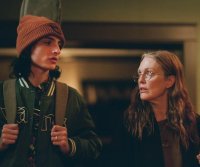