Natti Natasha was joined by Becky G to perform their song "Ram Pam Pam" on "The Tonight Show." File Photo by Gary I Rothstein/UPI | License Photo

Becky G walks the red carpet to celebrate the opening of the Goodtime Hotel in Miami Beach in April 2021. File Photo by Gary I Rothstein/UPI | License Photo

The duo was dressed in athletic clothing for the performance on Monday, which took place inside a basketball court.

Becky G blew a kiss to Natasha's baby bump as the song ended.

"We did that. So proud to represent both sides of myself on this stage. Had so much fun with my sis @NattiNatsha. Thank you @jimmyfallon @FallonTonight for inviting us! Just a girl from Inglewood doing what she's always dreamt of. Gracias Dios por todo," Becky G tweeted about the performance.

Natasha is expecting with fiancé Raphy Pina. The couple announced that they are expecting a girl on Twitter in April. 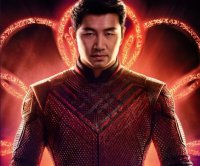 Movies // 14 hours ago
New 'Shang-Chi' trailer set for 'NBA Countdown'
June 24 (UPI) -- Marvel Studios will premiere a new trailer for "Shang-Chi and the Legend of the Ten Rings" Thursday during "NBA Countdown" on ESPN.