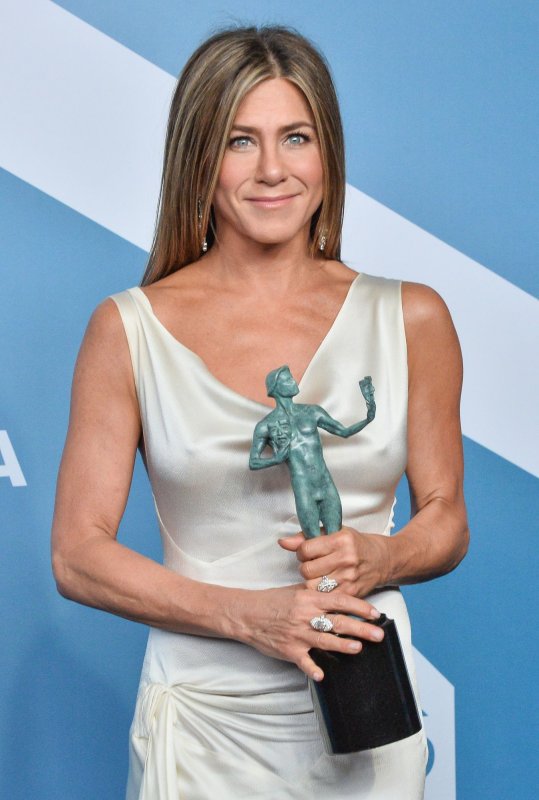 Jennifer Aniston appears backstage with the award for Outstanding Performance by a Female Actor in a Drama Series for "The Morning Show" during the 26th annual SAG Awards held at the Shrine Auditorium in Los Angeles on Sunday. Photo by Jim Ruymen/UPI. | License Photo

Aniston won the prize for her performance in the TV drama, The Morning Show.

Pitt was backstage because he had earlier received the Best Supporting Actor in a Film honor for his work in Once Upon a Time in Hollywood.

"We forever want to watch Brad watch Jen receive her Actor #sagawards," the clip was captioned.

SAG also posted a small gallery of photos of the former spouses smiling when they ran into each other earlier in the evening.

ETOnline reported the stars later attended the same Netflix after-party at Sunset Tower, but were not spotted interacting there.

Pitt began a long-term romance with actress Angelina Jolie while he was still with Aniston.

Pitt and Jolie raised six children together and exchanged wedding vows in 2014.

Jolie, 44, filed for divorce from Pitt in 2016 and it was finalized last year.

Aniston married screenwriter and actor Justin Theroux, 48, in 2015 and they separated in 2017.

Entertainment News // 16 hours ago
Bob Dylan apologizes to fans after autopen book signature controversy
Nov. 26 (UPI) -- Bob Dylan has apologized to fans who bought limited edition copies of his latest book which had a replica signature rather than original autographs.

Entertainment News // 1 day ago
'Fame,' 'What a Feeling' singer Irene Cara dead at 63
Nov. 26 (UPI) -- Grammy- and Oscar-winning singer-songwriter Irene Cara has died at her Florida home at the age of 63, her publicist announced on Twitter Saturday.

Entertainment News // 1 day ago
Ben Platt engaged to Noah Galvin after 3 years of dating
Nov. 26 (UPI) -- "People We Hate at the Wedding" star Ben Platt has announced on Instagram he is engaged to longtime beau and "Good Doctor" actor Noah Galvin.