NEW YORK, May 10 (UPI) -- Hollywood's Drew Barrymore has been named an Ambassador against Hunger for the United Nation's World Food Program, the organization announced Wednesday.

Barrymore, recently on the cover of People magazine's 100 Most Beautiful People, was in Washington Wednesday, where she stumped for legislation that would expand the McGovern-Dole International Food for Education and Child Nutrition Program, which regulates funding for school meals, E! News said.

The 32-year-old actress will focus on school meal programs, saying, "I can't think of any issue that is more important than working to see that no schoolchild in this world goes hungry.

"Feeding a child at school is such a simple thing -- but it works miracles," Barrymore said. "School feeding not only fills stomachs, but has a proven track record of boosting enrollment, attendance and academic performance."

Barrymore, currently seen in "Lucky You" with Eric Bana, joins a growing list of actors spotlighting different global issues. Angelina Jolie is an an ambassador for the U.N. High Commissioner for Refugees, while Michael Douglas acts as a U.N. envoy for non-proliferation. Brad Pitt, George Clooney, Madonna, Don Cheadle and Leonardo DiCaprio also have attached their names worldwide to social causes. 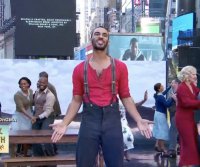