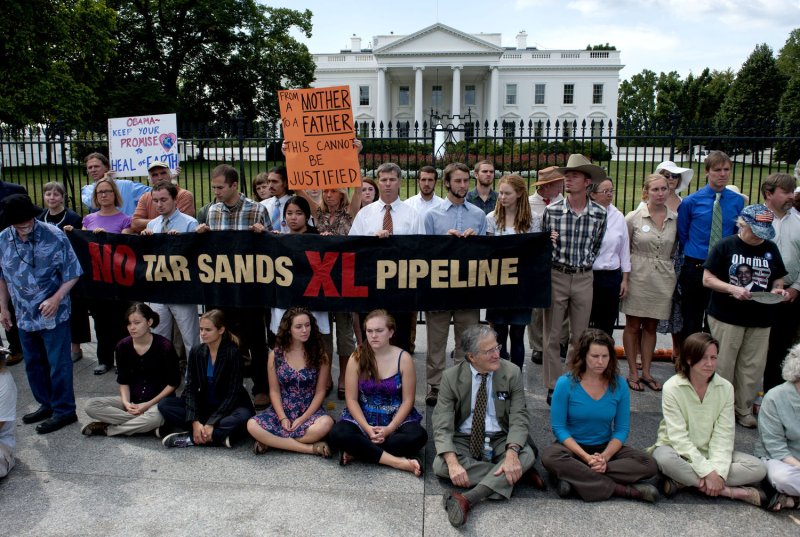 Members of the activist group Sojourners protest the Keystone Tar Sans Pipeline in front of the White House in Washington on August 23, 2011. UPI/Kevin Dietsch | License Photo

WASHINGTON, Sept. 6 (UPI) -- With a final U.S. congressional hearing one month away, environmentalists said they are preparing for more mass protests over a planned Canadian oil pipeline.

Thousands of people were arrested during recent protests in front of the White House. Bill McKibben, an activist at Tar Sands Action, a protest group that helped organize the White House rallies, said major sit-ins were planned for late September in Canada and early October in Washington to protest the Keystone XL pipeline, CNN reports.

TransCanada wants to build the $7 billion pipeline carrying oil from tar sands in Alberta, Canada, to refiners along the U.S. gulf coast. Sabrina Fang, a spokeswoman for the American Petroleum Institute, said China may sweep into Canada if the United States doesn't want their oil.

Activists are concerned that pipelines carrying the type of crude found in Alberta could have long-term impacts on the environment in the event of a spill. Michigan workers are still cleaning up from a spill of Alberta crude last year.

McKibben adds that tapping into Alberta tar sands can lead to severe environmental damage there.

"Even if you can get all that oil to Texas without spilling it, what you've done is open up a huge pipeline into the second-largest pool of carbon on Earth, after the Saudi oil fields," he told the cable news service.

The State Department, which needs to approve the project because it crosses national borders, had said there would be "no significant" impact on the environment from Keystone XL.