The Commerce Department said spending was up 0.2 percent but incomes fell by 3.6 percent, the sharpest decline in 20 years.

Personal incomes dropped 3.6 percent in the month, with incomes down by $505.5 billion. Discretionary funds, concurrently, dropped by 4 percent or by $491.4 billion, the department's Bureau of Economic Analysis said.

The drop in incomes was the steepest decline in that category since 1993, a drop partly caused by an uncharacteristic upswing in December as companies rushed their distribution of bonus checks and other dividends to beat a tax increase that was signed into law in early January.

Spending on services pushed spending's increase overall, as expenditures on goods dropped in the month. Personal savings absorbed the difference, as savings in January came to $283.9 billion, compared with $797.4 billion in December.

The report included the department's estimate of income for 2012, which rose 3.5 percent over 2011, a drop from the previous annual comparison. In 2011, incomes rose 5.1 percent, the department said.

WASHINGTON, March 1 (UPI) -- A report from a bipartisan think tank said the U.S government should slowly back out of supporting the housing market as extensively as it does now.

On the other hand, that might be more easily said than done, the report concedes.

"For the foreseeable future, there is simply not enough capacity on the balance sheets of U.S. banks to allow a reliance on depository institutions as the sole source of liquidity for the mortgage market," a report commissioned by the Bipartisan Policy Center said.

The report was written by a group that included president of the American Bankers Association Frank Keating, a former governor of Oklahoma, former Housing Secretary and former Republican Sen. Mel Martinez of Florida and other panelists, including former Senate Democratic Leader George Mitchell and former Housing Secretary Henry Cisneros, who served under President Bill Clinton.

The New York Times reported Friday the report recommends phasing out the Federal Home Loan Mortgage Corp., known as Freddie Mac, and the Federal National Mortgage Association, known as Fannie Mae, but replacing them with a similar institution that purchases loans, but concentrates its focus on loans for low-income borrowers.

"Given the size of the market and capital constraints on lenders, the secondary market for mortgage-backed securities must continue to play a critical role in providing mortgage liquidity," the report said.

Through Fannie Mae, Freddie Mac and the Federal Housing Administration, the government now backs about 90 percent of all new mortgages, a record that was prompted by the financial crisis of 2008 and 2009.

Martinez said he envisioned that dropping substantially with the FHA backing just 15 percent of new mortgages and the Fannie Mae and Freddie Mac replacement backing 35 percent to 45 percent more.

The goal would be to have the private sector guarantee 40 percent to 50 percent of new mortgages, Martinez said.

That would be, more or less, like the good old days. In the 1980s, banks held about 75 percent of their loans, keeping the profits but also accepting the risks. That might be a worthy goal to shoot for, Martinez said.

The year-on-year January decline was blamed mainly on a drop in the prices of household durable goods, including air conditioners, putting further pressure on overall prices, the government said Friday.

The core consumer price index, excluding fresh food, stood at 99.1 against the 2010 base of 100, Kyodo News reported.

The government of Prime Minister Shinzo Abe has made it its top priority to lift the economy out of its deflation-induced recession through a number of stimulus measures. Recently, Japan's central bank doubled its inflation target to 2 percent.

Last year marked the fourth consecutive year of deflation. Such a phenomenon of falling prices hurts the overall economy as consumers refrain from purchases in anticipation of additional price cuts, which hits demand and forces businesses to cut expenses and employment, creating a spiraling effect.

Stimulus measures have brought down the value of the yen against other major currencies, which should help boost exports. 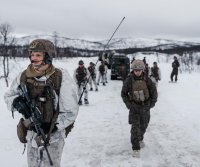