Stepped up search for killer

VALLEJO, Calif. -- Lawmen stepped up their search today for the slayer -- and his motive -- in the puzzling lovers lane death of a young couple on their first date.

"We have no motive at this point," said Sgt. Leslie Lundblad of the Solano County Sheriff's office, who explained that the couple had not been robbed nor had the girl been molested.

He said questioning of the couple's friends had failed to turn up any suspects in the Friday night death of David Faraday, 17, an Eagle Scout and varsity wrestler and his pretty date, Bettilou Jensen, 16.

The couple was found about 11:30 p.m. by a passing motorist on a lonely sideroad off Lake Herman road near Benicia. Faraday's body was found beside his station wagon. The girl had staggered about 11 feet from the vehicle before she fell.

Faraday was shot in the head at close range by a small caliber rifle. The bullet passed into his brain and he died en route to a hospital. Miss Jensen was shot five times in the back.

Lundblad said the couple had attended a Christmas concert, but he discounted speculation they had been followed to the remote lovers lane.

He said he reached this conclusion after questioning workmen who passed the death scene that night on their way to the graveyard shift at a nearby Humble oil refinery.

Separate funeral services were scheduled today for the victims. Miss Jensen, daughter of a retired Army colonel, was a student at Horan high school. Faraday, a student at Vallejo High School, was the son of a Pacific Gas & Electric Co. employe. 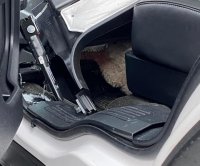 Odd News // 1 hour ago
Trapped poodle rescued from under seat of owner's SUV
Jan. 25 (UPI) -- Police, a firefighter, an animal control officer and a veterinarian came together in Massachusetts to rescue a 10-year-old poodle who ended up trapped under the seat of his owner's SUV.

Odd News // 2 hours ago
Wedding ring lost for 30 years found under carpet at man's former home
Jan. 25 (UPI) -- An Alabama man was reunited with his long-lost wedding ring 30 years later when the new residents of his former home found it while pulling up an old carpet.