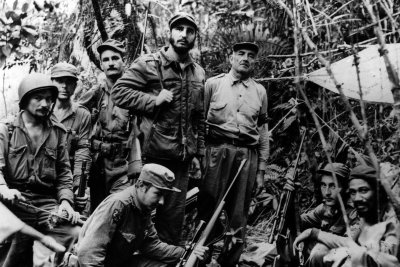 Xavier Cugat (Catalan pronunciation: ) (1 January 1900 – 27 October 1990) was a Spanish American bandleader who spent his formative years in Havana, Cuba. A trained violinist and arranger, he was a key personality in the spread of Latin music in United States popular music. He was also a cartoonist and a successful businessman. In New York, his was the resident orchestra at the Waldorf-Astoria before and after World War II.

Cugat was born as Francesc d'Asís Xavier Cugat Mingall de Bru i Deulofeu in Girona , Spain. His family emigrated to Cuba when Xavier was five. He was trained as a classical violinist and played with the Orchestra of the Teatro Nacional in Havana. On 6 July 1915, Cugat and his family arrived in New York as immigrant passengers on board the S.S. Havana.

FULL ARTICLE AT WIKIPEDIA.ORG
This article is licensed under the GNU Free Documentation License.
It uses material from the Wikipedia article "Xavier Cugat."
Back to Article
/