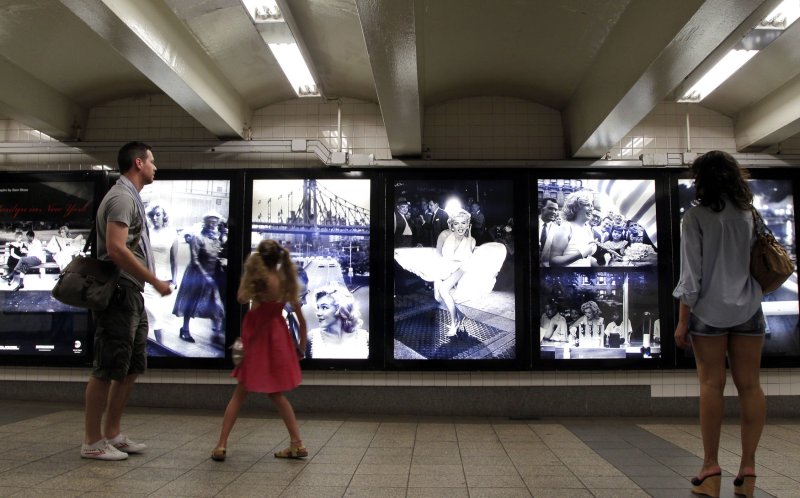 People stop to look at Marilyn Monroe photographs displayed in the New York City subway Aug. 7, 2014. The pictures were taken by Sam Shaw, who photographed many movie stars during his career. UPI/John Angelillo | License Photo

A U.S. postage stamp bearing the likeness of Humphrey Bogart is pictured July 23, 1997, a week before its official release date.f UPI | License Photo

In 1954, Marilyn Monroe and Joe DiMaggio divorced, Among the issues that ended their much-publicized marriage was a blowup over her famous scene in "The Seven-Year Itch" in which a blast of air lifts her skirt. The marriage lasted nine months.

In 1981, the National Labor Relations Board withdrew recognition of the Professional Air Traffic Controllers Organization because of an illegal strike by its members.

In 2010, at least 60 people, mostly women and children, were killed in Afghanistan when a three-story mud-brick house collapsed during a wedding.

In 2011, most "Occupy" demonstrations on economic matters that began on Wall Street and spread across the United States were peaceful. But a rally in Oakland, Calif., turned violent when police used force to keep protesters from setting up a tent camp in a downtown plaza from which they had been evicted earlier.

In 2012, the San Francisco Giants beat the Detroit Tigers 4-3 in 10 innings to sweep the World Series.

A thought for the day: "A hot dog at the ballpark is better than steak at the Ritz." -- Humphrey Bogart