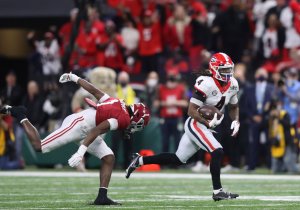 Top News // 4 months ago
The Almanac
On Jan. 18, 1997, Norwegian Borge Ousland completed a 1,675-mile trek across Antarctica. It was the first time anyone traversed the continent alone.

Science News // 1 year ago
Model shows first Australians travelled on 'superhighways'
Researchers have successfully modeled an ancient "superhighway" system in Australia that shows how Aboriginal tribes were able to migrate across the land.

The healthy condition of the coral at Bikini atoll today is proof of their resilience and ability to bounce back from massive disturbances, that is if the reef is left undisturbed and there are healthy nearby reefs to source the recovery

While some researchers are looking at various biomarkers in blood and other bodily fluids, we've identified 16 genes in the cartilage that may be involved with the onset of the disease

Captain James Cook FRS RN (7 November 1728 – 14 February 1779) was a British explorer, navigator and cartographer, ultimately rising to the rank of Captain in the Royal Navy. Cook made detailed maps of Newfoundland prior to making three voyages to the Pacific Ocean during which he achieved the first European contact with the eastern coastline of Australia and the Hawaiian Islands as well as the first recorded circumnavigation of New Zealand.

Cook joined the British merchant navy as a teenager and joined the Royal Navy in 1755. He saw action in the Seven Years' War, and subsequently surveyed and mapped much of the entrance to the Saint Lawrence River during the siege of Quebec. This helped bring Cook to the attention of the Admiralty and Royal Society. This notice came at a crucial moment both in his personal career and in the direction of British overseas exploration, and led to his commission in 1766 as commander of HM Bark Endeavour for the first of three Pacific voyages.

Cook charted many areas and recorded several islands and coastlines on European maps for the first time. His achievements can be attributed to a combination of seamanship, superior surveying and cartographic skills, courage in exploring dangerous locations to confirm the facts (for example dipping into the Antarctic Circle repeatedly and exploring around the Great Barrier Reef), an ability to lead men in adverse conditions, and boldness both with regard to the extent of his explorations and his willingness to exceed the instructions given to him by the Admiralty.

FULL ARTICLE AT WIKIPEDIA.ORG
This article is licensed under the GNU Free Documentation License.
It uses material from the Wikipedia article "James Cook."