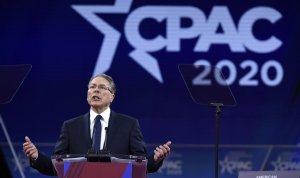 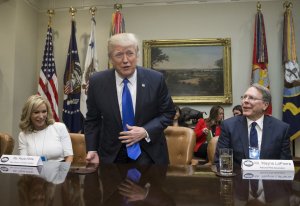 U.S. News // 1 year ago
NRA sues San Francisco over 'domestic terrorist' designation
The National Rifle Association has filed a lawsuit against the city of San Francisco, decrying a classification it placed on the gun-rights group as a "terrorist" organization.

U.S. News // 3 years ago
Trump says school safety a top priority, he would've confronted Florida gunman
President Donald Trump told U.S. governors Monday that the National Rifle Association was on their side during a meeting with the state leaders.

U.S. News // 3 years ago
Trump at CPAC: Guns in schools would deter 'cowards' from attacking
President Donald Trump took the stage Friday at the Conservative Political Action Conference, where he reiterated his support for arming schoolteachers.

If they make a decision to save their lives in the split second they are being attacked, the law is on their side

The victories we have delivered have been costly, cutting deeply into the NRA's budgets

This is a sad day for the Constitution, but the 4 million members of the NRA will continue to be heard. That I can promise

The government has completely abdicated its obligation to protect those people down there, those ranchers

Wayne LaPierre (born November 8, 1948), is an American author and Second Amendment advocate. He is best known for his position as the Executive Vice President of the National Rifle Association.

LaPierre graduated from Patrick Henry High School in Roanoke, VA in 1967. He received his BA in Education from Siena College in Loudonville, NY and his MA in government from Boston College. He has been a government activist and lobbyist ever since finishing his MA, including positions on the Board of Directors of the American Association of Political Consultants, the American Conservative Union, and the National Fish and Wildlife Foundation.

Since 1991, he has served as Executive Vice President and Chief Executive Officer of the National Rifle Association, the largest American gun rights organization. LaPierre joined the NRA in 1977 after working as a legislative aide to a Democratic Virginia Delegate Vic Thomas.

FULL ARTICLE AT WIKIPEDIA.ORG
This article is licensed under the GNU Free Documentation License.
It uses material from the Wikipedia article "Wayne LaPierre."
Back to Article
/