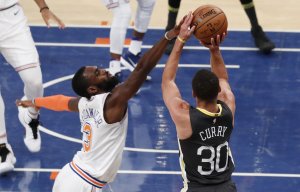 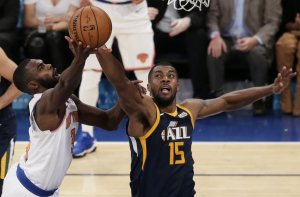 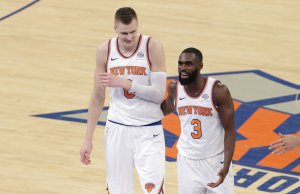 NBA // 5 months ago
Mavericks' Luka Doncic hits clutch jumper to hold off late run by Celtics
Luka Doncic rose over two defenders and drained a deep 3-pointer with less than a second remaining to lead his Dallas Mavericks to a dramatic win over the Boston Celtics Tuesday night.

NBA // 6 months ago
NBA issues $85,000 in fines for Hornets, Mavericks fight
The NBA on Friday issued a total of $85,000 in fines to Dallas Mavericks and Charlotte Hornets players for a dustup that occurred when they played Wednesday in Dallas.

Timothy Duane "Tim" Hardaway (born September 1, 1966) is a retired American basketball player who played in the National Basketball Association (NBA) and who in his prime was one of the league's best point guards. Six feet (1.83 m) tall, he was best known for his devastating crossover dribble (dubbed the "UTEP Two-step" by television analysts), a move which he helped to popularize among younger players. He is the father of Tim Hardaway, Jr.

Hardaway was born in Chicago, Illinois. After graduating from Carver Area High School in Chicago, he attended the University of Texas at El Paso (UTEP) where he won the Frances Pomeroy Naismith Award as the best college player six feet (1.83 m) tall or under. Hardaway was selected as the 14th pick of the first round, in the 1989 NBA Draft by the Golden State Warriors.

In his rookie season, Hardaway wore jersey number "5", as Manute Bol wore Hardaway's trademark "10". After Bol left the Warriors, Hardaway inherited it. With the Warriors, Hardaway was part of "Run TMC" (the initials of the players' first names, and a play on the title of the popular rap group Run DMC) which was the high-scoring trio of himself, Mitch Richmond, and Chris Mullin. As part of the Warriors' attack, Hardaway was responsible for leading Run TMC's fast break, displaying his excellent passing and one-on-one skills to complement Richmond's slashing and Mullin's shooting. Hardaway played for the Warriors until the middle of 1995–96 season when he was traded to the Miami Heat along with Chris Gatling in exchange for Kevin Willis and Bimbo Coles.

FULL ARTICLE AT WIKIPEDIA.ORG
This article is licensed under the GNU Free Documentation License.
It uses material from the Wikipedia article "Tim Hardaway."
Back to Article
/