NFL // 5 months ago
Rose Bowl: Alabama crushes Notre Dame, advances to CFP finale
Mac Jones and DeVonta Smith connected for three scores on Friday to lead Alabama to a lopsided victory over Notre Dame in the 2021 Rose Bowl and clinch a spot in the College Football Playoff National Championship game.

Sports News // 6 months ago
UCLA, Washington opt out of bowl season due to COVID-19; FSU-Wake Forest off
The UCLA Bruins and Washington Huskies joined a growing list of college football programs that have opted out of postseason play due to the COVID-19 pandemic. 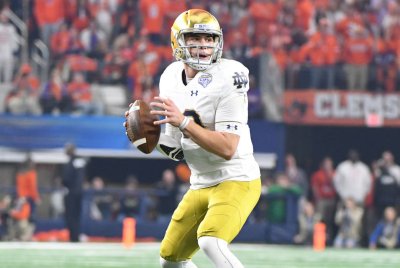 Sports News // 6 months ago
CFP's Rose Bowl, Fiesta Bowl to take place without fans due to COVID-19
The Rose Bowl and Fiesta Bowl will be played without fans in attendance this season because of the ongoing coronavirus pandemic, officials said.

Sports News // 7 months ago
UCLA to play Cal on Sunday following Arizona State, Utah cancellations
Shortly after the Pac-12 called off football games involving the UCLA Bruins and California Golden Bears, the conference announced that both teams will play each other Sunday at the Rose Bowl.

We entered the year hoping to return to a traditional matchup. The (BCS) system did not provide that to us

We entered the year hoping to return to a traditional matchup

The Rose Bowl Game is an annual American college football bowl game, usually played on January 1 (New Year's Day) at the Rose Bowl in Pasadena, California for 95 years. When New Year's Day falls on a Sunday, the game is then played on the following Monday. The Rose Bowl is nicknamed "The Granddaddy of Them All" because it is the oldest bowl game. It was first played in 1902, and continuously since 1916. Since 1945, it has been the highest attended college football bowl game. It is a part of the Tournament of Roses "America's New Year Celebration".

FULL ARTICLE AT WIKIPEDIA.ORG
This article is licensed under the GNU Free Documentation License.
It uses material from the Wikipedia article "Rose Bowl."
Back to Article
/