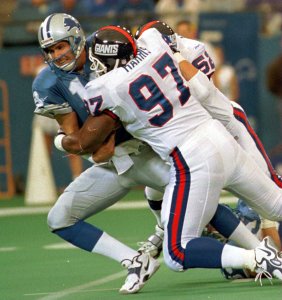 Movies // 1 year ago
Jeremy Irons to star in Netflix adaptation of 'Munich'
"Munich," a new film based on the Robert Harris novel, will feature "Watchmen" star Jeremy Irons and "1917" actor George McKay.

Sports News // 6 years ago
Report: Coach ordered high school players to hit referee
The two high school football players who brutally hit a defenseless referee during Sept. 4 game can return to school in January.
Movies // 7 years ago
'Hunger Games' stage show to open in London in 2016
A stage show inspired by the blockbuster "Hunger Games" books and films is in the works.
U.S. News // 7 years ago
Illinois police officer on leave for allegedly exploiting elderly man
A Chicago area policeman has been put on leave while his superiors investigate how he got a $20,000 check from an 85-year-old man with dementia, officials say.
World News // 1 decade ago
Italy seeks balance for Pompeii site
A bestselling author on Pompeii, Italy, says the collapse of a ruin illustrates the need for balance between preservation and allowing visitors at such sites.
Movies // 1 decade ago
Polanski finishing up 'The Ghost' in jail
Roman Polanski's friend says the French-born filmmaker is finishing up his latest movie from the Swiss prison where he has been held for nearly three weeks.
Top News // 1 decade ago
Dead friend kept crash survivor 'warm'
An elderly Pennsylvania woman survived a car wreck in which she was pinned under the body of her dead companion for two nights, police said.
Entertainment News // 1 decade ago
Cage, Brosnan to appear in Polanski film
Nicolas Cage, Pierce Brosnan and Tilda Swinton reportedly are set to star in "The Ghost," a political thriller Roman Polanski plans to film soon in Europe.
Top News // 1 decade ago
Georgia grandpa wins $270 million
A Georgia grandfather parlayed his grandchildren's birthdays into a $270 million lottery windfall, it was reported Saturday.

Just told him that I wasn't working anymore and I'm retiring

Roman Polanski is a terrific director of tense thrillers, and I couldn't imagine a better person to make a movie out of 'The Ghost,

It just shows that we haven't necessarily progressed to the extent that we say we have as a child welfare system. Basic issues that have been litigated 30 years ago tend to crop up

It was a minor injury. He was running when it happened

We are faced with a paradox: the more people visit Pompeii, the more Pompeii is destroyed

Robert Harris (born June 13, 1969 in Riviera Beach, Florida) is a former American football defensive end and defensive tackle in the National Football League. He was drafted by the Minnesota Vikings in the second round of the 1992 NFL Draft. He played college football at Southern University.

FULL ARTICLE AT WIKIPEDIA.ORG
This article is licensed under the GNU Free Documentation License.
It uses material from the Wikipedia article "Robert Harris."