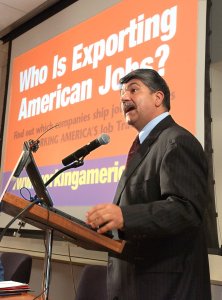 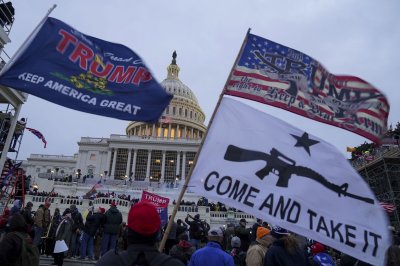 U.S. News // 8 months ago
Trump threatens to send military to 'solve' violent U.S. protests
President Donald Trump on Monday declared he has mobilized all federal response and encouraged governors to establish an "overwhelming law enforcement presence" in response to protests over the killing of George Floyd.

U.S. News // 5 years ago
White House trying to save controversial trade package on eve of vote
On the eve of a House vote that will make or break the White House's proposed free trade deal, top Democrats are working to round up all the votes they can get.

Energy News // 5 years ago
Fast-track trade deal stirs U.S. pot
U.S. Secretary of State John Kerry lauded a congressional measure to open international trade doors, though opponents said the measure puts the climate at risk.
Business News // 7 years ago
AFL-CIO president considers radical step to expand membership
The president of the AFL-CIO said the organization, traditionally made up of unionized workers, needs to open its doors to accept non-union members.
Health News // 7 years ago
Report: An average 13 U.S. workers die on the job every day
An average of 13 U.S. workers die on the job every day while an additional estimated 137 die each day from occupational diseases, AFL-CIO officials say.
U.S. News // 7 years ago
The Issue: Plenty to love, loathe in Obama's 2014 budget
Congressional Republicans and Democrats began voicing their displeasure over U.S. President Obama's 2014 budget plan, either saying it didn't go far enough to cut spending, or it raised taxes or it intruded too much on entitlements or left seniors in a lurch.

You've turned the American economy into your own private casino, gambling away our financial future with our money, driving us to the brink of a second Great Depression, then sticking out your hand for taxpayers to bail you out

Richard Louis Trumka (born July 24, 1949) is an organized labor leader in the United States. He was elected President of the AFL-CIO on September 16, 2009, at the labor federation's convention in Pittsburgh, Pennsylvania. He served as the Secretary-Treasurer of the AFL-CIO, from 1995 to 2009, and prior to that was President of the United Mine Workers from 1982 to December 22, 1995.

Trumka, born in Nemacolin, Pennsylvania near Pittsburgh, is an Italian American, third-generation Polish American, Roman Catholic, coal miner son of Frank Richard and Eola Elizabeth (Bertugli) Trumka. He went to work in the mines in 1968. He received a bachelor of science degree from Pennsylvania State University in 1971 and a law degree from Villanova University in 1974. He married Barbara Vidovich in 1982. They have one son.

FULL ARTICLE AT WIKIPEDIA.ORG
This article is licensed under the GNU Free Documentation License.
It uses material from the Wikipedia article "Richard Trumka."
Back to Article
/