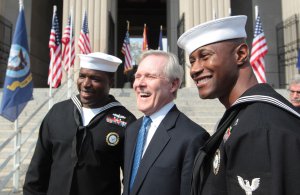 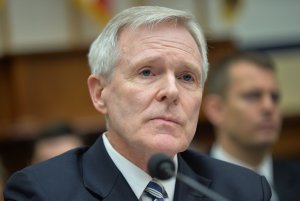 Defense News // 1 year ago
Truman CSG to remain at sea until Nimitz can deploy, Navy says
Former Secretary of the Navy Ray Mabus said Wednesday that the Navy should bring all its ships into port and quarantine the majority of the crews while the vessels undergo a deep clean .

President John F. Kennedy exemplified the meaning of service, not just to country, but service to all humanity

Aircraft carrier to be named after Kennedy May 30, 2011

Mabus began his professional career working in Washington as legal counsel to the U.S. House Agriculture Committee. Following the election of Governor William Winter, he returned to Mississippi to work in the governor's office, where the youthful staff– which included Mabus, Dick Molpus, John Henegan and Andy Mullins– earned the nickname "Boys of Spring" from a rival state legislator.

FULL ARTICLE AT WIKIPEDIA.ORG
This article is licensed under the GNU Free Documentation License.
It uses material from the Wikipedia article "Ray Mabus."
Back to Article
/