Susan DiMarco, wife of former Secretary of Homeland Security Jeh Johnson, had her initials traced onto a metal plate with a welding torch, signifying the laying of the keel for SSN 796. 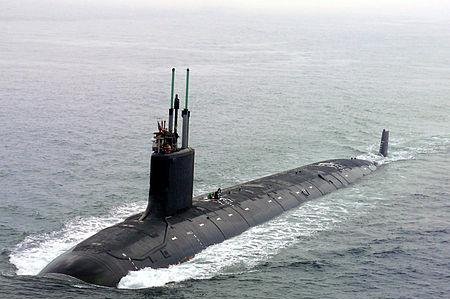 Ship sponsor Susan DiMarco, a retired dentist, chalked her initials onto a metal plate as her husband, former Secretary of Homeland Security Jeh Johnson and their son, Jeh Johnson Jr., who serves in the U.S. Coast Guard, watched Monday.

"I am extremely proud to sponsor the submarine New Jersey, named for my home state," DiMarco said in a company news release. "My family prides itself on service to our great country, and I am pleased to contribute in this way."

Shipbuilder Jess Batruk, who is originally from New Jersey, then traced the initials with a welding torch.

Her work signifies the keel of SSN 796 as being "truly and fairly laid."

"We enjoy participating in the Navy's many traditions," said Jennifer Boykin, president of Newport News Shipbuilding. "They offer us an opportunity to pause and reflect on our daily work and remind the talented shipbuilders and the crew of the important role we all play in something much greater than ourselves -- our nation's defense.

Construction of the New Jersey, which is the 23rd Virginia-class fast attack submarine, began in March 2016 and is about 42 percent complete. The company is scheduled to deliver the ship to the Navy in 2021.

Seventeen Virginia-class submarines have been commissioned, and 11 are under construction.

All but two of subs -- the John Warner and the Hyman G Rickover -- are named after states.

The New Jersey was named in 2015 in Jersey City,

"New Jersey's relationship with our Navy has been defined by innovation, leadership, and courage- in conquest and in combat," Secretary of the Navy Ray Mabus said at the time. "The name of our newest nuclear-powered fast-attack submarine will carry on that strong tradition."

The Navy's first submarine, USS Holland, was designed and constructed in 1900 in New Jersey.

Each Virginia-class submarine is 7,800 tons and 377 feet in length, and can operate at more than 25 knots submerged. Because of a nuclear reactor plant, the subs won't require refueling during the planned life of the ship.